The University of Wisconsin–Madison has introduced a Master of Science in Physics – Quantum Computing (MSPQC), the first program of its kind in the US. Most of the students will complete their degrees in August 2020, and they will be primed to enter the rapidly growing field of quantum computing.

The new program grew out of a recognized workforce need, says Bob Joynt, professor of physics at UW–Madison and director of the MSPQC program.

We started graduating PhDs in the area of quantum computing maybe 10 to 15 years ago and they did fine, they found jobs. But then a few years ago, we started noticing that these graduates were in much more demand than our other graduates. Sometimes there were bidding wars, and that had never really happened before.

Joynt and others in the department worked closely with the College of Letters & Science and the Graduate School to develop the program and curriculum. The degree is designed to be completed in 12 months, includes lecture and laboratory courses, and offers optional directed research. 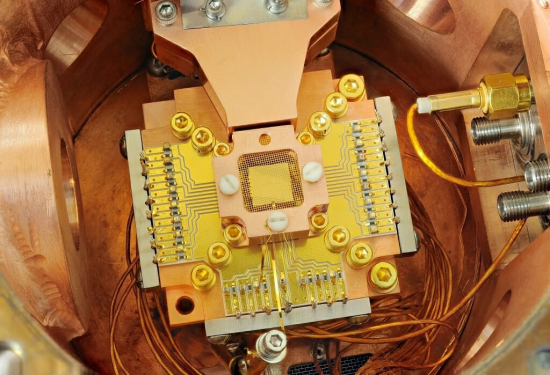 National Institute of Standards and Technology physicists used this apparatus to coax two electrically charged atoms into swapping the smallest measurable units of energy back and forth, a technique that may simplify information processing in a quantum computer. Photo: Y. Colombe / NIST

The MSPQC program was designed to attract engineering students because it doesn’t require a physics background. Joynt is able to catch students up on quantum mechanics in the first month of his introductory class, one of three new courses developed for the degree. The second course, a spring lecture, focuses on the four main types of quantum computers, how they are made, and how they work. The third is an intensive summer laboratory course where students build and work with hardware that will eventually be used to make quantum computers.

An optional—but encouraged—part of the MSPQC program is directed research. The curriculum initially did not include a research component, because Joynt and others thought the coursework would take up all the students’ time.

The first MSPQC class is nine students, and the vision for the program is to enroll 20 to 25 students each year.