Using machine learning and simulations, scientists at the US Department of Energy’s Oak Ridge National Laboratory (ORNL) have confirmed a relationship between two mechanisms used to explain the ductility properties of magnesium alloys, according to an open-access study published in Materials & Design. 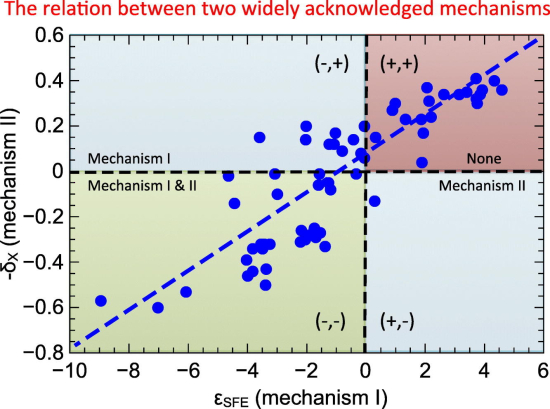 The correlation between the two ductility descriptors with Pearson’s r = 0.864. Based on the mathematical signs of the two descriptors, the whole space is divided into four quadrants with the sign pairs of the descriptors to represent each quadrant. The minus sign means a solute contributes to the enhancement of ductility through the mechanism, while the plus sign means that there is no such effect. For example, solutes in the third quadrant are expected to improve the intrinsic ductility of Mg through both mechanisms, while those in the first quadrant are expected not to have the effect. Pei and Yin.

Understanding the deformation mechanisms of Mg has been a long-standing and significant problem for materials scientists. Currently, there are two widely acknowledged ductility-improving mechanisms, i.e., the dislocation nucleation mechanism and dislocation mobility mechanism. Since the two mechanisms were previously investigated using very different solute sets, hitherto there is no clear understanding of the relation between them. Based on the newly proposed descriptors for the mechanisms, high-throughput calculations are performed for 63 solutes. Our results confirm that the two mechanisms are strongly correlated. In most of the cases, the same solute has the same effect on the deformation through both mechanisms.

The method used could be applied to the study of other types of alloys.

As the lightest structural metal discovered to date, magnesium has presented itself as a promising material for the next generation of automobile and aerospace products. Magnesium also provides a high strength-to-weight ratio, and it is capable of good heat and electrical conductivity.

However, in its natural state, magnesium doesn’t allow for much change in its shape without breaking. To solve this problem, scientists combine it with other materials. This results in magnesium alloys with the ability to be flexible under stress, a property known as ductility.

For years, the ductility of magnesium alloys has been explained through two mechanisms that have been widely acknowledged by researchers.

These two mechanisms have often offered similar predictions on alloy ductility. However, they are vastly different, and for that reason, the relationship among them has remained unclear.

To better understand the relationship between the two mechanisms, Yin and his coauthor, former OLCF postdoctoral fellow Zongrui Pei, performed first-principles calculations on Summit to assess the physical properties of the potential alloy materials. They needed to estimate physical quantities used for descriptors of the two mechanisms in order to make predictions about alloys’ ductility.

To evaluate those predictions, they then developed a machine-learning model based on elemental properties that are readily available.

Yin and Pei’s work is a continuation of an ORNL Laboratory Directed Research and Development Program-funded project led by Markus Eisenbach, a computational scientist with the OLCF who specializes in condensed matter and materials science. This work used OLCF computing resources made available through an Innovative and Novel Computational Impact on Theory and Experiment (INCITE) allocation also led by Eisenbach.

The methodology developed for this study can also be used to further research in other areas of materials science.

The next step for us is to test this method to have a better understanding of high-entropy alloys, and see if we can predict better combinations.

The OLCF is a US Department of Energy Office of Science User Facility.