SEAT, a Volkswagen Group company, has expanded the number of supply routes for the transport of components using duo trailers and giga trailers, the two longest types of trucks with the greatest capacity travelling on European roads. 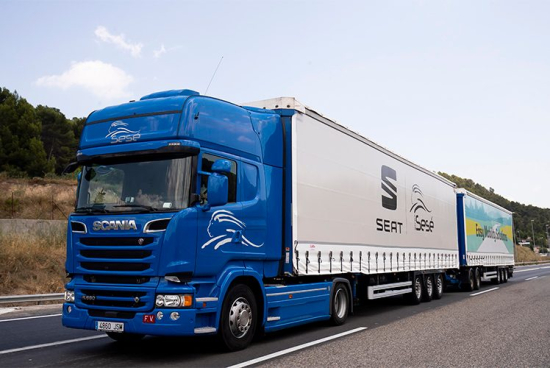 The Spanish company currently has two duo trailer routes that link the Martorell factory with Teknia in Azuqueca de Henares (Madrid) for the delivery of interior finish parts, and with Global Laser in Ribera Baja (Álava) for the transport of sheet metal components, which began a few weeks ago. In addition, SEAT also uses two giga trailers to transport metal bodywork components from the Gestamp factory in Orcoyen (Navarre) to Martorell and a further one for the delivery of sheet metal components from KWD, also in Orcoyen.

SEAT first rolled out the duo trailer in 2018 in a pilot phase, after testing the giga trailer for the first time two years earlier. The company pioneered the use of both trucks in Spain, in the framework of its firm commitment to sustainable road transport. It expects to open new routes with both trucks in order to take a leap forward in the use of this form of transport.

The duo trailer features two 13.6-meter-long trailers pulled by a truck, with a total length of 31.7 meters and a maximum payload capacity of 70 tonnes. Designed for travelling on high capacity roads, the duo trailer lowers the number of trucks that travel on conventional roads, which is where the highest number of road accidents take place, and enables a 25% decrease in logistics costs.

In this sense, six duo trailers take up 36.5% less space on the road compared to six regular trucks. In addition, SEAT is testing new, 520 hp nine-axle trucks that will reduce emissions by 30%, compared to the current 20%.

The giga trailer, the duo trailer’s ‘little brother’, measures 25.25 meters in length and has a maximum payload capacity of 60 tonnes. It consists of two trailers, one measuring 7.8 meters and an additional one that stretches to 13.6 meters pulled by a truck, with a combined maximum payload of 60 tonnes. This truck delivers a 22% savings in logistics costs and lowers CO2 emissions by 14%.

Rail transport also plays a key role in SEAT’s logistics. The company exports more than 80% of the vehicles made in Martorell and rail transport is ecological, profitable and efficient. Thanks to the Autometro service, which connects the SEAT factory in Martorell and the Port of Barcelona for the export of vehicles, SEAT does away with around 25,000 trucks annually on the route between Martorell and Barcelona.

This service relies on a 411-meter train with articulated double-decker carriages that can carry 170 vehicles. In October 2018, the Autometro line posted the figure of one million vehicles transported since it opened in 2008.

SEAT also benefits from another rail service called Cargometro—a shuttle train which transports parts from the Zona Franca plant to the Martorell factory. With Cargometro, SEAT Barcelona operates as an additional workshop of Martorell and replaces more than 16,000 truck trips yearly.