In the Bergedorf quarter of Hamburg, a container with a total capacity of approximately 500 kWh has been connected to the depot charging network at the Verkehrsbetriebe Hamburg-Holstein (VHH) depot. There, MAN Truck & Bus and VHH want to work together to test how used batteries behave after initial use in vehicles and as a stationary energy storage system, under real-world operating conditions. 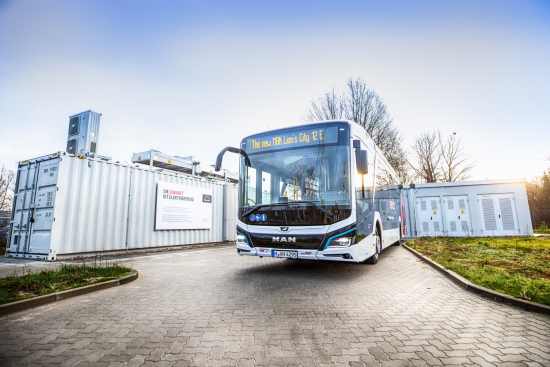 The 50 batteries in the container were previously installed in VW Passat GTE vehicles. Each battery has a nominal capacity of 9.9 kWh, meaning that the container has a total capacity of exactly 495 kWh. The batteries are mounted on racks and then interconnected via battery management to form a large battery. 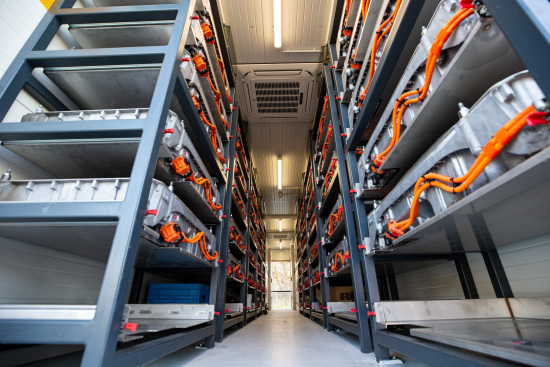 One objective of the project is to develop a flexible battery storage concept which allows for the replacement of batteries.

The “second use” energy storage system is the product of a memorandum of understanding (MoU) which Verkehrsbetriebe Hamburg-Holstein and MAN Truck & Bus signed in March 2018. Since directly disposing of batteries which were installed in vehicles is not environmentally sound, the two companies want to put re-using these batteries in a stationary storage system to the test. 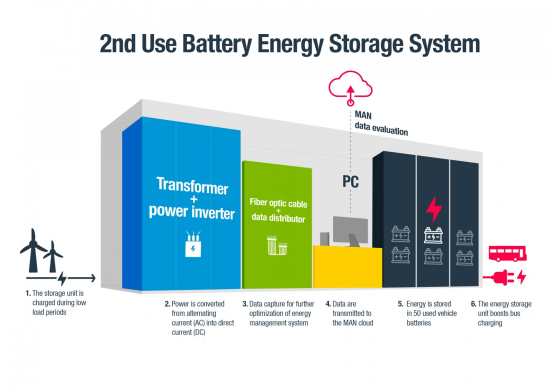 Different scenarios are tested using the large storage system to optimize power consumption at the VHH depot. This includes improved utilization of the network and cushioning of peak loads when charging electric buses (peak shaving).

With the peak shaving method, the storage system can reduce up to 600 kW of peak load, and thereby lower the costs when using electricity.

Additionally, the project partners anticipate new findings on the ageing behavior of the batteries, on efficient battery management and on the life cycles of future battery technologies.

Verkehrsbetriebe Hamburg-Holstein GmbH, which is head-quartered in Hamburg, employs more than 1,600 people and provides transportation for more than 100 million passengers a year. The fleet comprises approximately 560 buses, which are to be converted to electric drive in the coming years.

VHH will test the first electrically driven city bus from MAN—the MAN Lion’s City E—in day-to-day operations at the beginning of 2020. Another 17 additional MAN vehicles for the VHH fleet will follow at the end of 2020.

Testing of the second use energy storage system is taking place as part of the mobility partnership between the Free and Hanseatic City of Hamburg and the Volkswagen Group, of which MAN is also part.

Clever, but are there enough second-life batteries to make a significant difference out there?  I suspect not.

Someone said you can never charge battery to battery.

Someone is too stupid to understand that "lossy", "expensive" and "doubles cycling wear" means "it's bad engineering and bad policy", not "it's physically impossible".