Total vehicle miles traveled (VMT) by all vehicles in the United States vary greatly across the individual states. The latest annual data from the Federal Highway Administration show that in 2018 the maximum (348,796 million miles in California) was 94.5 times greater than the minimum (3,691 million miles in the District of Columbia). The top and bottom 10 states are presented in the table below. 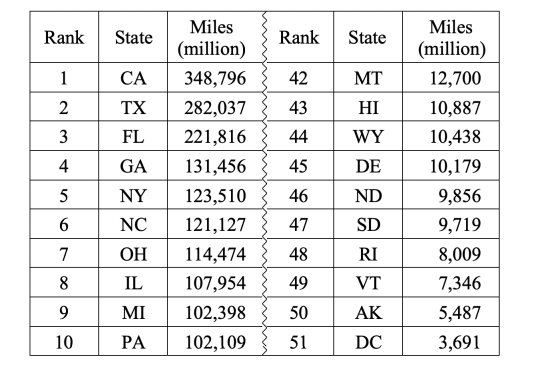 Because total VMT depends, in part, on the size of the population, of interest in this study was the variation among the states in vehicle miles traveled per person (VMT per person). The calculations used the total VMT by all vehicles from the above-cited source (the Federal Highway Administration) and the resident populations from the U.S. Census Bureau. The data apply to 2018. The results are presented in the table below. 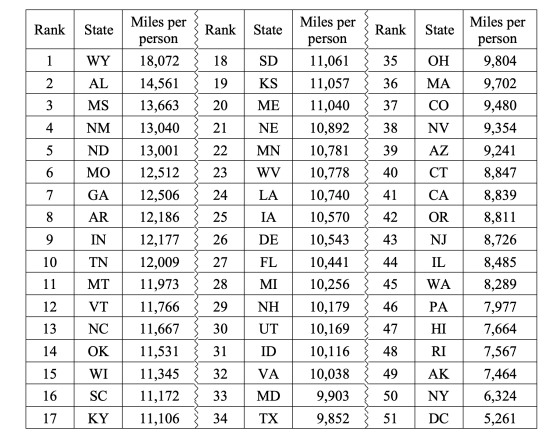 The results show that VMT per person in 2018 ranged from 18,072 miles in Wyoming to 5,261 miles in the District of Columbia. These two distances differ by a factor of 3.4, as compared with a factor of 94.5 for the two states with the maximum and minimum total VMT.

A quick perusal of the information in the above table reveals that higher levels of VMT per person tend to be associated (albeit not perfectly) with lower population densities (people per area), and vice versa. For example, the state with the highest VMT per person (Wyoming) is the state with the second lowest population density (just behind Alaska, which is unique in several relevant aspects, including the geography and the weather). The states that follow Wyoming with the highest levels of VMT per person are Alabama, Mississippi, New Mexico, and North Dakota. Their population-density rankings are 28, 33, 46, and 48, respectively.

For comparison purposes the VMT value for Great Britain in 2018 is 328,100 million miles which would put it just below California. (ref: https://assets.publishing.service.gov.uk/government/uploads/system/uploads/attachment_data/file/801185/tra0101.ods)

The VMT per person is 5,082 miles which makes it lower than any of the US states.