Hybrids represented 52% of all Toyota Motor Europe sales in 2019; 63% in West Europe 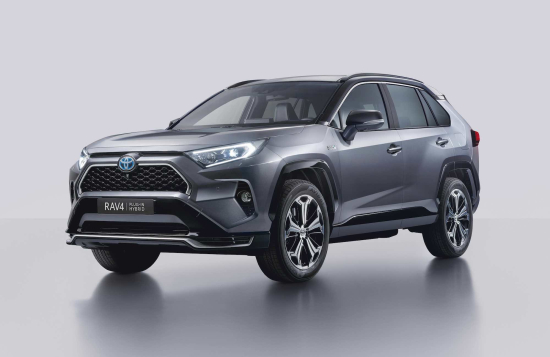 The new RAV4 plug-in hybrid will be the flagship of Toyota’s hybrid lineup in Europe.

A total of seven new model launches in 2019 across both brands provided additional momentum for year-on-year growth.

In the core C-segment Toyota launched all new versions of Corolla Hatchback and Touring Sports, available in both 1.8L – 122 hp and 2.0L - 180hp hybrid powertrains and extended hybrid to the new Corolla Sedan for the first time.

The launch of new RAV4 was well received by customers with demand currently outstripping supply. Other new launches included introducing a hybrid version of Camry to Western Europe and the return of GR Supra.

Toyota will introduce its new RAV4 plug-in hybrid (earlier post) during the second half of 2020, with on-sale dates to be determined according to country/market.

The RAV4 PHEV—the new flagship vehicle for Toyota’s hybrid line-up—will sit at the pinnacle of the fifth-generation RAV4 range. The RAV4 is one of Europe’s most popular SUVs with more than 130,000 customer orders since its launch early in 2019, including more than 115,000 hybrids (Western Europe).

The new RAV4 Plug-in Hybrid is constructed on Toyota’s GA-K platform, with added dynamic benefits achieved by locating the hybrid battery beneath the floor. It is also equipped as standard with the Toyota’s AWD-i intelligent electric all-wheel drive system.

Toyota has harnessed the boost in performance electric power can deliver to achieve a significant increase in output compared to the standard RAV4 Hybrid. It has developed a new, high-capacity lithium-ion battery and added an enhanced boost converter to the hybrid system’s power control unit. The 2.5-liter Hybrid Dynamic Force gasoline engine is based on the unit featured in the regular RAV4 Hybrid, with improvements to meet the performance requirements of the plug-in hybrid system.

With full system output of 306 DIN hp/225 kW, the RAV4 plug-in hybrid has the potential to deliver acceleration from rest to 100 km/h in 6.2 seconds, outperforming any of its conventionally powered rivals. It is also on course to deliver best-in-class CO2 emissions and fuel economy: Toyota’s pre-homologation, WLTP-standard data indicates CO2 output of less than 29 g/km. These levels are unmatched by any current D-segment plug-in hybrid AWD SUV.

Total Lexus sales increased by 14.5% in 2019 to a record 87,206 vehicles, posting a sixth consecutive year of growth with sales doubling since 2013. Continued growth in 2019 was boosted by the launch of the new Lexus UX, a premium compact crossover, the new Lexus ES sedan and an updated Lexus RX. Lexus mix in Western Europe is now almost exclusively hybrid with a 96% mix and 67% across all Europe.