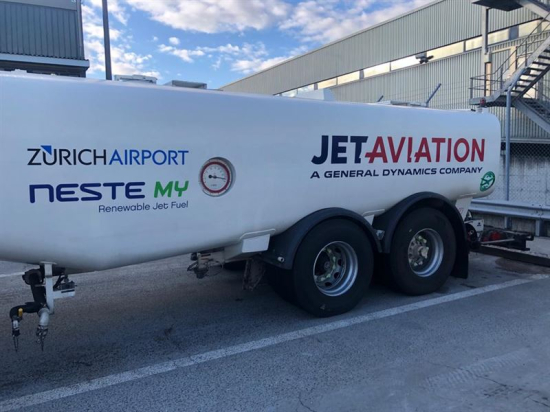 Neste MY Renewable Jet Fuel has up to 80% smaller carbon footprint compared to fossil jet fuel. As a result of close collaboration between Neste, Jet Aviation and Zurich Airport, this sustainable aviation fuel will be blended with fossil jet fuel.

Business jets operating in Zurich during the World Economic Forum event in Davos can avail themselves of sustainable aviation fuel.

The aviation industry accounts for approximately 2-3% of global man-made CO2 emissions and global aviation is growing. The aviation industry has set targets to reduce aviation-related emissions, including carbon-neutral growth from 2020 onwards and a 50% reduction of net aviation carbon emissions by 2050. Sustainable aviation fuels are seen as an important part of the solution.

Neste MY Renewable Jet Fuel is based on Neste’s proprietary NEXBTL technology and produced from 100% renewable waste and residue raw materials. It is fully compatible with the existing jet engine technology and fuel distribution infrastructure when blended with fossil jet fuel. In the US and Europe, the company’s renewable jet fuel annual capacity is currently 100,000 tonnes (approximately 30 million gallons US).

With further production expansion on the way, Neste will have the capacity to produce more than 1 million tonnes (approximately 300 million gallons US) of renewable jet fuel globally by 2022.

The global fuel consumption by commercial airlines has increased each year since 2009 and is predicted to reach an all-time high of 98 billion gallons in 2020, according to analysis by Statista.

It seems doubtful that this stuff was shipped via the usual petroleum pipelines.  One wonders just how much carbon was emitted in the process of trucking it to Zurich?