A new study by University Maritime Advisory Services (UMAS) and Energy Transitions Commission (ETC) prepared for the Global Maritime Forum for the Getting to Zero Coalition, estimates that the cumulative investment needed between 2030 and 2050 to halve shipping’s CO2 emissions amounts to approximately $1-1.4 trillion—an average of $50 billion to $70 billion annually for 20 years.

The report authors note that these figures should be viewed in the context of annual global investments in energy, which in 2018 alone amounted to US$1.85 trillion. The global shipping fleet accounts for ~2.2% of CO2 emissions.

If shipping is to fully decarbonize by 2050, this will require further investments of some $400 billion over 20 years, bringing the total to $1.4 trillion to $1.9 trillion.

The estimate of investments required is based on ammonia (NH3) being the primary zero carbon fuel choice adopted by the shipping industry as it moves towards zero carbon fuels. (Earlier post.) Under different assumptions, hydrogen, synthetic methanol, or other fuels may displace ammonia’s projected dominance, but the magnitude of investments needed will not significantly change for these other fuels.

To avoid shifting emissions upstream, efforts to decarbonize shipping also include the decarbonization of fuel production. The analysis is therefore based on the use of low/zero carbon hydrogen as input to the production of ammonia. 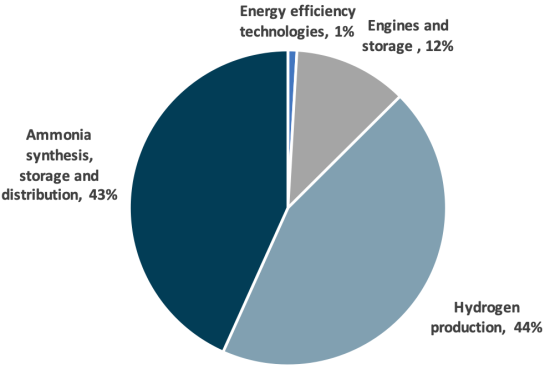 Only 13% of the investments needed are related to the ships themselves, which include the machinery and onboard storage required for a ship to run on low carbon fuels in newbuilds and, in some cases, for retrofits.

Ship-related investments also include investments in improving energy efficiency, which are estimated to grow due to the higher cost of low carbon fuels compared to traditional marine fuels.

This makes the challenge of decarbonizing the shipping sector a whole system challenge and not something just for shipping, the report says. Given the majority of investment is on land, any R&D fund needs to enable deployment and scaling of the land-side, and not just work on equipment for ships.

The risk is that we end up with a fleet of zero-emission ships, no decarbonization of fuel production (e.g. producing ammonia using natural gas) and then shift the emissions upstream.

Energy infrastructure and ships are long-life capital-intensive assets that normally evolve slowly. In the next three decades however, our analysis suggests we will see a disruptive and rapid change to align to a new zero carbon system, with fossil fuel aligned assets becoming obsolete or needing significant modification. Even though regulatory drivers of this system change such as carbon pricing are only starting to be debated, the economic viability of today’s investments and even the returns on recent investments will be challenged, and the sooner this is factored in to strategies and plans, the better.

—Dr Tristan Smith, Associate Professor at the UCL Energy Institute and one of the authors

Much of shipping’s decarbonization will take place on land. It is a systemic transformation that goes beyond the capabilities of the maritime industry alone. We need to bring together the full range of upstream and downstream fuels value chains to unlock shipping’s shift to zero carbon energy sources. Done right, this represents a trillion-dollar market opportunity.

The estimates of investment needed come from the UMAS shipping model GloTraM. The model simulates decisions from a shipowner’s perspective to identify the fuel, technology and operation combinations that maximize their profits and therefore identifies the likely pathways for the sector’s evolution under a combination of macroeconomic and policy drivers.

The model includes a detailed representation of the different ship types within the global fleet, and the production pathways, their capital and operating costs, for a range of potential low and zero carbon fuels. From this, the investment implications for fleet and land-side infrastructure of the model-identified likely pathway are then obtained.

These reports talk about cost, but fail to so much as mention the crucial detail how much fuel/carbon is involved?

Digging, I discovered the IMO's report from last year:

These ships currently cruise at about 50% power for economy reasons and are in port for substantial periods, so their rated power is probably on the order of 400 GW(t) or 200 GW at 50% efficiency.  How much would you have to invest to nuclearize this much power?  At $5000/kW(e), it would require about $1T.  It looks like nuclear needs to come down in price before it becomes competitive with ammonia, even for the largest vessels.

No mention in the analysis of the retirement of coal and petroleum carriers by 2050. Coal, oil and gas make up around 40% of global shipping, much of it becoming redundant if the world decarbonises as it needs to. https://chinadialogueocean.net/9192-global-shipping-industry-asset-stranding/