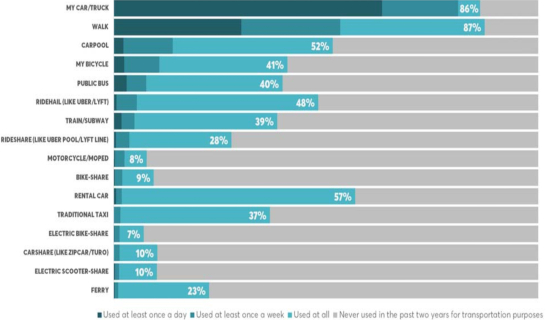 Chart shows the percentage of Americans who have used some common modes of transportation in the past two years. Source: Consumer Reports

The survey reveals safety is a major concern for consumers considering these transportation options, including overwhelming support (90%) for mandatory background checks for drivers of ridehailing services such as Uber and Lyft, as well as for mandatory vehicle inspections (82%) and actions for vehicle recalls (73%).

Other findings from the survey include:

The multi-mode survey was fielded by NORC at the University of Chicago using a nationally representative sample. The survey was conducted from 27 September – 14 October 2019.