Bosch boosts stake in SOFC expert Ceres Power to around 18%; possible expansion into SO electrolysis

Bosch has increased its stake in solid-oxide fuel-cell (SOFC) developer Ceres Power from 3.9% to around 18%. The stake increase is achieved through a subscription by Bosch for new Ceres Power shares, as well as the purchase of further shares from existing shareholders.

Bosch’s total investment will be approximately €90 million (US$100 million). To enhance the strategic investment and the strength of the partnership, under the terms of the transaction, Bosch is granted the right to appoint a Non-Executive Director to the board of Ceres Power. 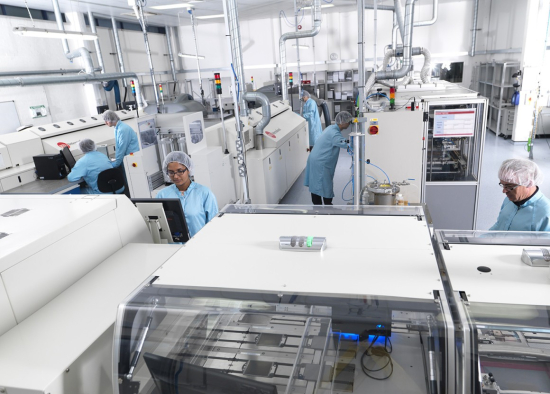 Bosch and Ceres Power are pressing ahead with the development of fuel-cell technology for potential new power systems. Picture: Bosch

Since signing a strategic agreement in August 2018, Bosch and Ceres have been successfully collaborating in the development of fuel-cell stacks for stationary applications. This enabled Bosch to start initial low-volume production of pilot fuel-cell systems in autumn 2019 in Germany.

Bosch intends for the increased stake to further support the collaboration towards future potential scale-up and mass manufacture of the Ceres SteelCell for multiple applications including small power stations to be used in cities, factories, data centers and charge points for electric vehicles.

Ceres notes that the funds will be used to fund further product uses for solid-oxide fuel-cells and to diversify its R&D activity to potential electrolysis applications for Ceres’ technology.

Solid oxide electrolysis (SOEC) is essentially the process of reversing fuel cells to produce hydrogen and e-fuels from renewable energy. Electrolysis with Ceres’ technology could use low-cost electricity and, unique to higher temperature electrolyzers, waste heat to convert water and carbon dioxide to high value chemicals such as hydrogen and other synthetic transport fuels, precursors for fertilizers and replacements for other petrochemical products.

High temperature electrolysis can potentially play a significant role in the decarbonization of the “hard-to-abate” sectors such as steel, other industrial heat consumers and even aviation. The Ceres Board believes that there is significant future value associated with this opportunity.

Early-stage testing on the application of Ceres’ technology as a solid oxide electrolyzer (SOEC) has delivered encouraging results, the company said.

The fuel-flexible SteelCell can generate power from conventional fuels such as natural gas and from sustainable fuels such as biogas, ethanol or hydrogen and it does so at very high efficiency.

—Dr. Christian Fischer, member of the Bosch management board

Ceres Power is a leading player in the development of next-generation SOFC technology. Its strategy is to commercialize its technology through licensing for mass production with partners, and to use this technology for grid-based and distributed power generation.

Bosch has confirmed to Ceres that it does not intend to make an offer for the company.

Anyone, MFRCs or consumers, investing in H2 technology must thoroughly examine their opportunities to insure that they're betting on the right horse. Generally, for urban or intermediate commute, H2 will never be a viable choice based on expense and complexity. For all those thinking beyond the tip of their nose, a BEV will fulfill their requirements just fine; now and even more so in the years to come.

How about presenting your own views without an inbuilt assumption that you are God and in a position to tell others what they should think and do?

We know you fancy batteries everywhere, for everything, and ignore other options.

Go for it, be happy, but don't offer impertinent unsolicited advice.

Ceres were very forthcoming with technical papers outlining exactly what they were doing when we have looked at them here over the years.

They don't seem to have maintained the links on the site last time I looked, presumably because a lot of what they were saying is no longer in doubt.

They have attracted powerful partners in the field, for instance Nissan for their commercial vehicle BEV range extender, and of course Bosche, along with others.

I think they look to have a bright future, with home fuel cells in Europe one of the targets, building on the success of the technology in Japan with 300,000 units installed.

They promise a considerable increase in energy efficiency over current centralised NG facilities, combustion boilers in the home and long distance transmitted electricity.

SOFC/EC can make synthetic fuels from CO2 and wind/solar.

@ Davemart:
I'm a firm believer in Democracy for nigh unto 8 decades and can do quite well without gods and goddesses; I don't envy you if you can't. I speak for myself when I say, I'm happy not to be stricken with such a mental deficiency.
I can only endorse what I have stated in my first post and I'm certain that in the long run H2 will only play a minor role in the overall commute.
I assume that you are on the payroll of big oil or one of their affiliates; I'm not and never was. IOW "birds of a feather flock together".
If you were really wise and I don't mean a wise guy, then you would first of all heed the advice yourself that you are passing on to others.

I'm with yoatmon here.  IIUC, H2 fuel is currently running about $15/kg in California; at that price there is zero market potential for H2FCVs.  Such vehicles will likely be PHEVs by necessity (keeping the size and cost of the FC down and minimizing H2 requirements) and at that point the competition is the ICE PHEV at much lower cost and zero new infrastructure required.

All the talk about "blue hydrogen" shows that the H2FCV is the oil companies' strategy to keep control of transportation energy.  It's all a scam, and we taxpayers are paying for it.  ENOUGH!

There's nothing in the article about using hydrogen for urban or intermediate commute. Did you read it?

On the contrary, SOEC are well suited to utilize the waste heat from e.g. methanisation of CO2 + 4H2 to produce steam, because SOEC use steam, not water, for electrolysis (for obvious reasons, working at about 700°C). The really neat thing about this is that the energy required to evaporate the water (going from water to hydrogen + oxygen implies going from liquid to gaseous phase, i.e. evaporation) normally comes from electricity with alkaline and PEM electrolysis but that fraction is saved with SOEC. Thus, they're more likely to be used in an integrated production of e.g. power-to-methane.

Why would you produce methane, when the US is afloat with it. Well, maybe in the US you wouldn't, but in Europe there is a market for 'Renewable' methane. Normally, to be regarded as 'renewable', both the electricity and the CO2 should originate from 'renewable' sources, such as wind/solar and the CO2 from biological origin, although there is a strong case to be made for allowing the use of CO2 from non-energy producing, yet necessary sources, such as waste, cement, steel, etc.

Transportation is probably best done with batteries, but transportation 'only' accounts for 28.9% of US CO2 emissions.

utilize the waste heat...
That is the idea, SOEC can take carbon and heat from power plants.

The energy requirement for SOEC (the ones I know about - not the Ceres Power ones) is 3.0 kWh/Nm3 = 33 kWh/kg. That does not include the heat of evaporation. Let's put it at 40 kWh then.

What is the cost of cheap solar power (PV) in California? 3-4 cents/kWh? That puts the cost of generating hydrogen at 1-1.5 $/kg, plus plant depreciation, considering maybe 3,000 full-load-hours per year (option to optimize plant size with batteries). But there is also oxygen sales to capitalize upon.

Seems like there's a pretty good business case for producing hydrogen for a market that is willing (?) to pay 15 $/kg.

You'd saturate the market for oxygen well before you got near your production rate, so the value to place on O2 is consistent with 0.

I don't know why anyone is touting electro-synthetic methane here.  It takes .5 kg H2 to reduce 750 g of carbon as CO2 to methane plus water, plus you have to find the CO2.  That takes 20 kWh of H2 per the estimate above, and air capture is still pretty energy-intensive.  What you get out is 1 kg of methane at 50 MJ LHV, out of which you can get maybe 30 MJ (8.33 kWh) in a CCGT power plant.  That is a really lousy throughput efficiency, suggesting that it's something that only works for very high-value applications.  Generating bulk electricity isn't one of them.