Norway-based energy company Equinor has contracted with Eidesvik Offshore for the Viking Energy supply vessel, which is being retrofitted to make it capable of covering long distances fueled by carbon-free ammonia. The vessel will transport supplies to installations on the Norwegian continental shelf (NCS). 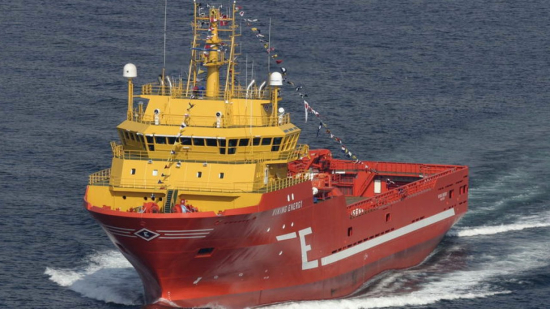 Equinor awarded Eidesvik Offshore a five-year contract with effect from April 2020, when the current contract expires. The Viking Energy supply vessel will in the contract period be part of a research project developing, installing and testing long-distance sailing propelled by a carbon-free-ammonia-fueled 2 MW solid-oxide fuel-cell (SOFC) system.

This is the first time an ammonia-powered fuel cell will be installed on a vessel. A significant part of the project will be the scale up of a 100-kilowatt fuel cell to 2 megawatts. The ammonia fuel-cell system will be installed in Viking Energy in late 2023. The technology will be tested on the vessel from 2024.

The project will test whether the technology can deliver 100% carbon-free power over long distances (up to 3,000 hours of sailing annually). According to the project plans, ammonia will meet 60 to 70 percent of the power requirement on board for a test period of one year. Viking Energy will still be able to use LNG as fuel, and the remaining power requirement will be met by battery.

Equinor is part of the European innovation project ShipFC, a consortium of 14 European companies and institutions coordinated by NCE Maritime Cleantech.

The main partners of the five-year research project are NCE Maritime Cleantech, Eidesvik Offshore, Wärtsilä, Prototech and Equinor. Wärtsilä will deliver the power technology and ammonia storage and distribution systems. Prototech will deliver the fuel-cell system.

The project represents the latest stage in the long running collaboration between Equinor, Eidesvik and Wärtsilä. The three companies successfully collaborated on a number of environmental and cleantech projects over the years. Viking Energy was the first LNG powered ocean going vessel in 2003, and Eidesvik and Wärtsilä also collaborated on the 2009-built Viking Lady, another LNG-fueled vessel that was seen as a milestone in the transition of shipping with its installation of fuel cells and marine batteries.

Equinor aims to reduce the emissions in our supply chain, and regards the use of ammonia as a promising solution. Viking Energy may become the first supply vessel in the world covering long distances fueled by pure carbon-free ammonia.

Together with the Konkraft partners, Equinor earlier this year launched a joint ambition to reduce the greenhouse gas emissions from oil and gas operations in Norway by 40% by 2030, and to near zero by 2050.

If we solve this the ship industry will for the first time use a fuel that does not generate emissions during combustion. Much work remains, but Equinor will contribute both to technology development and as a customer. We have never before used a carbon-free fuel on a large vessel without range anxiety.

Ammonia research on Viking Energy has a total budget of NOK 230 million (US$25.6 million), a substantial part of which is EU funded. The partners also have a good dialogue with Innovasjon Norge and Enova about potential additional funding of the project.

A recent study by A.P. Moller - Maersk and Lloyds Register found that alcohol, biomethane and ammonia are the best-positioned fuels to reach zero net emissions for shipping. (Earlier post.)

In 2018 the UN maritime organization IMO adopted a strategy to halve emissions from international maritime operations by 2050, phasing them out as soon as possible.

Equinor has since the early 2000s proactively addressed ways of cutting emissions from supply vessels on the NCS. Viking Energy was the first LNG-fueled vessel in Equinor’s fleet in 2003, and the first vessel with hybrid battery power in 2016.

Hybrid battery power and power from shore are now part of the requirements for all supply vessels that sign long-term contracts with Equinor. During 2020 all the 19 supply vessels on long-term contracts with Equinor will feature battery power and power from shore. Ammonia-fueled vessels will be a new step in the efforts to reduce the carbon footprint from maritime operations.