The 2020 Honda Clarity Plug-In Hybrid began arriving at dealerships in the US last week. New for the 2020 model year is an updated Acoustic Vehicle Alert System (AVAS) that functions whenever the car is operating at low speeds on electric power only (unless in Park), enhancing awareness for pedestrians, bicyclists and other road users. Manufacturer’s Suggested Retail Price (MSRP) is $33,400. 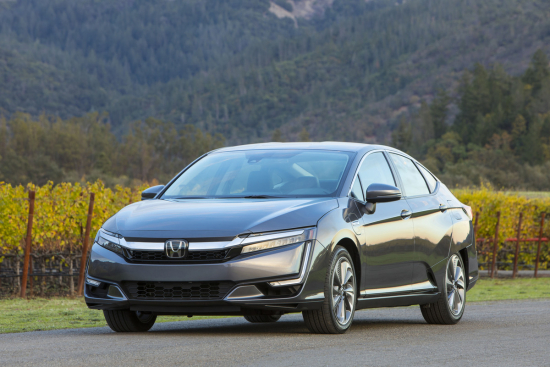 The 2020 Clarity PHEV received a 47 miles of all-electric driving range rating with a full charge and an EPA fuel economy rating of 110 MPGe. For longer trips, the 1.5-liter Atkinson cycle 4-cylinder gasoline engine engages to generate electricity for the electric motor and, under certain conditions, to act as a direct power source.

Drivers can select between Normal, Econ and Sport to customize their driving experience to maximize efficiency or performance, while a special HV mode that maintains the battery’s state of charge can be used in all modes.

Clarity PHEV’s drive motor produces 181-horsepower and 232 lb-ft of torque, drawing power from electricity generated by the gasoline engine and from a 17-kilowatt hour (kWh) battery pack with a recharge time of just 2.5 hours at 240 volts. Total system output of the Clarity Plug-in Hybrid’s two-motor hybrid powertrain is 212 horsepower.

That is a very big battery for a PHEV.
Perhaps they should offer one with a 9 kwh battery which should be lighter and cheaper.
On the other hand, a price of $33,400 is very low IMO for a PHEV of any battery size.

I believe the extra battery weight is offset by the lack of any transmission in their electric drive train since ~2014. The 2 electric motors and clutches do the work until highway speeds when the engine is clutched directly to the wheels. No tranny is lighter than any tranny. Driving reports seem positive too.

Yeah, this is one to watch.

The big battery is what distinguishes the vehicle in the market. The 40+ mile battery range makes it a more useful commuter car. Honda does make a similar and lighter car with a smaller (1.2 kwh) battery, the Insight.
US buyers also generally get the $7500 tax credit for having the big battery, so that lops a lot off of the price. Smaller battery is a smaller tax credit. Crass, but true.
TBH, I do drive a 2018 one of these, and it is heavy, but I also run it as an EV about 80% of the time, which is a real savings of gas and carbon, since my area's electricity is more than 50% carbon-free.

How much weight does the 1.5 motor and related parts add?
How much room would you have if you removed the ICE and related parts?
Seems like it would have been easy enough to make this a full EV with about 40 kWh.
Great that it has a decent EV range for a PHEV, but why just not make it full EV then?

A 1.5 liter engine plus its associated systems and fuel tank is a lot cheaper than the same weight of batteries, and "recharges" many times as quickly.  This is part of why today's "sweet spot" for petroleum displacement is not the BEV, but the PHEV.

The Honda Clarity is a great automobile. It has only one problem. The 17 kWh battery pack weighs too much (6-800 pounds). This makes the Clarity weigh over 4000 pounds. The battery should weigh 220 lbs (100 kg ). This is what Obrist Powertrain proposes for it's battery - 98 kg, that is 203 Wh/kg and it has 110kW continuous discharge power using standard 18650 batteries (Note: the Clarity 181 hp motor is 135 kW, so higher power batteries needed). Why can't Honda do the same and put their excellent powertrain in all of their models?

gryf, DO try to keep up with {$current_day} technology and energy density .  Stop penalizing those who were ahead of the curve in the year they made a purchase/lease.

Anyone who bought a 2018 Honda Clarity made an outstanding purchase. It will last and still be worthwhile in 20 years. The only criticism is to Honda that hesitates to implement this technology across their product line (caveat I have bought Honda automobiles for over 40 years). The current Honda Clarity PHEV battery is built like a battleship, it is water cooled and will probably last 20 years, if not the replacement cost is less than $5000.
Correction: last year in a 02/06/19 GCC post "Honda Partners with CATL on Li- ion EV Batteries . . ." I stated that the Blue Energy EHW5 battery cell was used in the Honda Clarity, it was used in the Honda Clarity FCV not the PHEV. The PHEV uses a Panasonic 27.3 Ah battery cell. You can read all the battery details in the XTECH article "Honda Reduces Engine Displacement for New PHEV(3)" at https://tech.nikkeibp.co.jp/dm/atclen/news_en/15mk/071302227/.

Last year I checked into if/when Honda would build a Passport PHEV (they had been testing a Pilot PHEV). A Honda rep who had worked at the Honda Alabama plant said told me about the battery weight and said that it would be too heavy for the Pilot/Passport. So I have waited for Honda to build a lighter battery. However, now Toyota is building the RAV4 Prime PHEV. So a tough decision.