Researchers from Lawrence Berkeley National Laboratory (LBNL) and Nissan Research Center report on their investigation of the internal reforming of ethanol fuel on high-performance metal-supported solid-oxide fuel cells (MS-SOFCs) with infiltrated catalysts in a paper in the Journal of Power Sources. 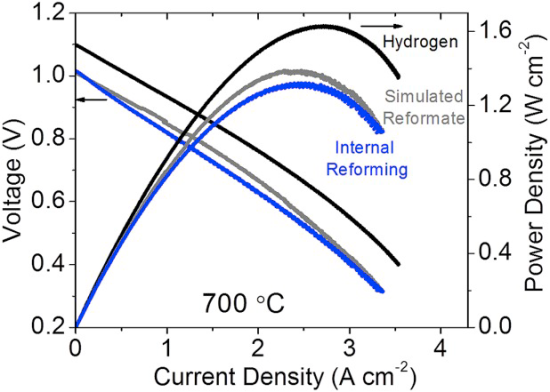 Nissan’s public interest in ethanol-fueled solid-oxide fuel cells stretches back several years to its announcement of the e-Bio Fuel cell system in 2016. (Earlier post.) The e-Bio Fuel Cell system featured an an SOFC stack and an on-board reformer to convert 100% ethanol or ethanol-blended water (55% water, 45% ethanol) to hydrogen. At the time, Nissan said it planned commercialization of the technology in 2020.

In the new paper, the LBNL-Nissan team noted that currently, reforming of hydrocarbon fuels for use with SOFCs is mainly performed external to the SOFC stack.

However, for small-scale and portable applications the complexity, size and weight of the system can be reduced by eliminating the external reformer and annex units, and performing internal reforming of the fuels inside the SOFC stack. This approach would be practical and cost-effective for vehicular applications due to size and weight restrictions for the SOFC system.

In this work, ethanol is considered as a renewable transportation fuel for use in MS-SOFC range extenders in vehicles. Dilution of ethanol with water increases safety, and is expected to suppress anode coking by increasing the steam-to-carbon ratio.

… To improve internal reforming of ethanol fuel in conventional SOFCs, the primary approach has been to augment or replace the Ni anode electrocatalyst. …The majority of these studies reported low performance with ethanol (peak power <0.3 W cm􏰀-2 at 600–800 ˚C), due to the use of inherently low-performing cells, incomplete reforming, or both.

… It is also imperative to note that a simple comparison of SOFC performance with hydrogen and ethanol fuel is commonly reported in literature. Such approach does not address the large range of derating factors. Individual effects that should all be taken into consideration include: (1) hydrogen concentration (lower hydrogen content in reformed fuel and concentration polarization across the thickness of the anode), (2) internal reforming (chemical catalytic activity towards fuel reforming), and (3) coking (deposition of solid carbon that can block the reforming or electrochemical catalysts active sites). Separation of these effects would inform development of cell architecture and catalyst compositions for ethanol internal reforming. 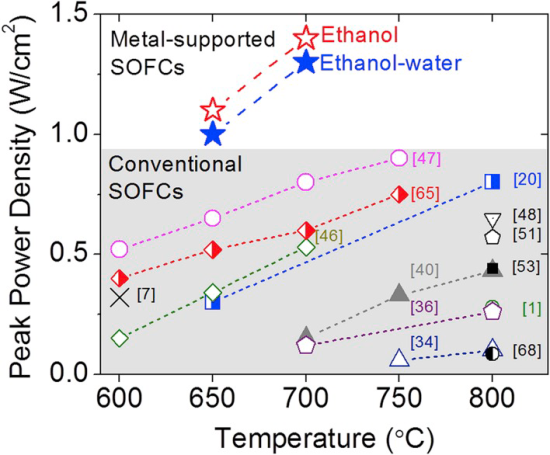 Simple infiltration of high-surface area Ni nanoparticles over the fuel-side metal support and anode layers lead to unprecedented peak power density between 1.0 and 1.4 W cm􏰀-2 at 650–700 ˚C, with internal reforming of ethanol-water blend and anhydrous ethanol fuel. Stable electrochemical operation in ethanol-water blend was observed after 25 h at 700 ˚C and 0.7 V.

The work was funded in part by Advanced Research Projects Agency - Energy (ARPA-E).

SOFCs are not as affected by CO like PEMs.