Researchers at the University of Texas San Antonio have published a review of the security and privacy risks posed by e-scooters and their related software services and applications.

We were already investigating the risks posed by these micromobility vehicles to pedestrians’ safety. During that study, we also realized that besides significant safety concerns, this new transportation paradigm brings forth new cybersecurity and privacy risks as well.

—Murtuza Jadliwala, an assistant professor in the Department of Computer Science, who led this study

According to the review, which will appear in the proceedings of the 2nd ACM Workshop on Automotive and Aerial Vehicle Security (AutoSec 2020), hackers can cause a series of attacks, including eavesdropping on users and even spoof GPS systems to direct riders to unintended locations. Vendors of e-scooters can suffer denial-of-service attacks and data leaks. 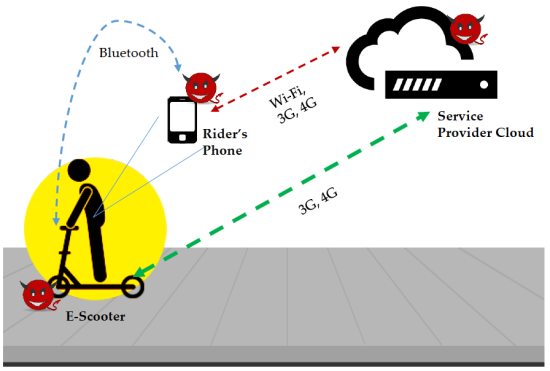 Micromobility vehicles are gaining popularity due to their portable nature, and their ability to serve short distance urban commutes better than traditional modes of transportation. Most of these vehicles, offered by various micromobility service providers around the world, are shareable and can be rented (by-the-minute) by riders, thus eliminating the need of owning and maintaining a personal vehicle. However, the existing micromobility ecosystem comprising of vehicles, service providers, and their users, can be exploited as an attack surface by malicious entities—to compromise its security, safety and privacy.

Those who sign up to use e-scooters also offer up a great deal of personal and sensitive data beyond just billing information. According to the study, providers automatically collect other analytics, such as location and individual vehicle information. This data can be pieced together to generate an individual profile that can even include a rider’s preferred route, personal interests, and home and work locations.

This study was produced in UTSA’s Security, Privacy, Trust and Ethics in Computing Lab, which was also behind the recent publication on how smart bulbs can be hacked. The lab is dedicated to examining privacy and security issues in ubiquitous devices.

I'd say the main danger is that someone would hit a hole in the road and tip over, cracking their head and hands in the process.
Or, someone will trip over one dumped on the pavement and crack their skull.

In fact, a fairly large amount of money was allocated for this, but the article was interesting to me, thanks.
David, writer at 99papers reviews