Researchers from the Chinese Academy of Sciences and Tsinghua University have used a gallium, indium, tin and bismuth alloy to generate hydrogen, when placed in contact with an aluminum plate immersed in water. The hydrogen is then used in a PEM fuel cell. An open-access paper on their work appears in the Journal of Renewable and Sustainable Energy, from AIP Publishing. 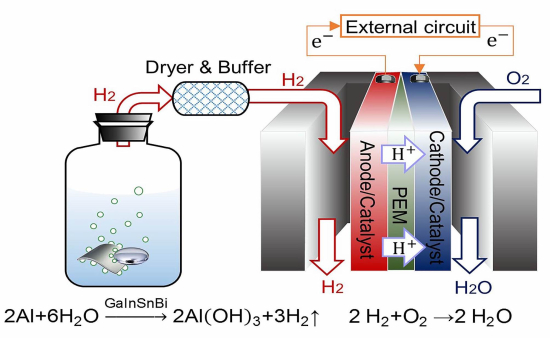 A schematic diagram demonstrating the combination of a hydrogen extraction system and a PEMFC for power supply. Credit: Jing Liu

In their study, the Ga-In-Sn-Bi alloy-activated Al-H2O reaction was demonstrated to be rate-stable with a hydrogen productivity of 92% and therefore superior to similar reactions activated by Ga-In and Ga-In-Sn alloys, the authors said.

Hydrolysis of active metals is a widely known hydrogen production approach. Al is a favored hydrogen generation material because of its relatively low cost, low density, and abundant geological reserves. An inevitable barrier encountered during the use of Al is that a thin oxide film forms immediately once Al is exposed to air, impeding further contact and reaction between Al and water. Only acid or alkaline solutions can dissolve this passive film, but such solutions cause corrosion.

In the 1960s, Woodall et al. found that low melting point metals such as gallium and its alloys could disrupt the oxide film on the Al surface and activate Al-H2O reactions. Since then, considerable efforts have been made to investigate hydrogen generation performance via hydrolysis of Al-Ga based alloys. Al and liquid metal (LM) alloys are alloyed via high-temperature melting or mechanical milling in advance. However, these processes consume energy and time, and the preprepared alloys are easily passivated. In addition, the high cost of hydrogen transport is a key barrier to hydrogen utilization. Hence, it is necessary to develop real-time, on-board hydrogen production systems.

In 2015, Zhang et al. found that gallium-based LM could spontaneously encase Al foil and trigger the Al-H2O reaction at room temperature. Before use, Al and the LM alloys were stored separately to prevent passivation. Once hydrogen was required, Al and the LM alloys were placed together in electrolyte, where they immediately began to produce hydrogen. Tan et al. compared hydrogen production from Al-H2O reactions triggered by different binary alloys including Ga-In, Ga-Zn, and Ga-Sn. Different metal compositions performed in substantially different ways. … Adding Sn not only can enhance the hydrogen generation rate but also accelerates oxidation of the LM alloy. The Ga-In-Sn alloy-activated reaction initially proceeds quickly, but its reaction rate soon decreases.

In the study, a 3 g Al plate activated by Ga-In-Sn-Bi alloy steadily exported an electrical power of 0.73 W via a PEM fuel cell.

Overall, hydrogen generation from the Ga-In-Sn-Bi alloy-activated Al-H2O reaction exhibited excellent stability and durability, making it a preferred hydrogen source for fuel cells. In addition, no complex prepreparation work was required, and the reaction proceeded in a neutral solution. Thus, this is a promising method of real-time, on-demand hydrogen production with potential for use in various applications.

However, said senior author Jing Liu, a professor at the Chinese Academy of Sciences and Tsinghua University, it is important to be able to recycle the alloy in order to further reduce cost and environmental impact.

There are various problems in existing methods for post-reaction mixture separation. An acid or alkaline solution can dissolve aluminum hydroxide but also causes corrosion and pollution problems.

Other byproduct removal methods are difficult and inefficient, and the problem of heat dissipation in the hydrogen reaction process also needs to be optimized. Once these difficulties are resolved, this technology can be used for applications from transportation to portable devices, Liu said.

When I have looked into the various proposals to generate hydrogen using aluminium, barriers to its widespread or other than very specialised, say military or space perhaps, rapidly became apparent.

These researches themselves name some of the barriers.

Nothing much is likely to happen anytime soon outide a lab.

Is this the same process Trevor Jackson and Austin Electric is using for their AL Battery?

I love the predictably minimal references to the "external circuit" shown in the diagram - and of course no reference to the external power source let alone the overall energy equation and energy efficiency - especially relative to electric vehicles powered by today's batteries or by near-future EV powerpacks which will combine solid-state batteries(Li-ion/ Na-ion) and energy-dense supercapacitors.
Paul G

the problem of heat dissipation in the hydrogen reaction process also needs to be optimized.

This is because the process of hydrogen generation from aluminum has huge irreversibilities.  I covered this way, WAY back in 2005: