SEAT presented at its Martorell facilities the all-new SEAT Leon compact. The company, a member of the Volkswagen Group, has invested more than €1.1 billion in fourth generation of the Leon to bring it to market with more efficient engines, next levels of connectivity and driving assistance, dynamism and eye-catching aesthetics to the market. 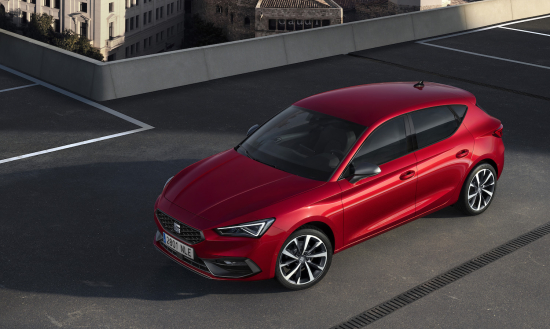 Models equipped with a DSG automatic transmission now benefit from shift-by-wire technology. The system is designed so that the gear selector is not connected to the gearbox mechanically, instead using electronic signals to shift.

The shift-by-wire provides the possibility to select gears without using a physical shifter. This is useful for the new automatic park assistance systems, where the mechanical parking lock was substituted for an electronically controlled parking lock.

Gasoline. The new Leon’s offer of standard gasoline engines are all direct-injection, turbocharged units and provide power outputs between 66kW/90PS and 140kW/190PS.

The two lower output engines which produce 66kW/90PS and 81kW/110PS of power are 1.0 liter TSI three-cylinder units, which are used in the SEAT Leon for the first time. Two 1.5-liter engines are available with power outputs 96kW/130PS and 110kW/150PS.

The two 1.0-litre units as well as the 1.5 TSI 96kW/130PS use a Miller-cycle combustion process and variable geometry turbocharger to take efficiency to the next level in this displacement size engine.

The Miller-cycle optimizes valvetrain control with early closure of the inlets combined with a higher compression rate and turbocharging to better control the air-fuel mixture, to improve efficiency by up to 10%. The 1.5-liter units also integrate Active Cylinder Management to maximise efficiency.

At the top is the 140kW/190PS 2.0-liter TSI unit linked to the dual-clutch transmission.

CNG. The all-new SEAT Leon has the option of a CNG 1.5-liter TGI unit that produces 96kW/130PS of power. The vehicle integrates 3 CNG tanks with a total net capacity of 17.3kg, giving the CNG-power all-new SEAT Leon a CNG range of 440 km (273 miles) without needing to refuel. And if the CNG tanks do run dry, the engine switches automatically to run on gasoline until reaching the next CNG fuel station.

48V mHEV. The all-new SEAT Leon also offers mild hybrid technology (eTSI), allowing the compact car to provide even greater efficiency levels. The system, which is available with the 1.0 TSI 81kW/110PS and the 1.5-liter 110kW/150PS gasoline units, mates 48V mild-hybrid technology to the combustion engine, which not only adds the efficiency of electrification, but uses a dual-clutch transmission rather than manual.

The SEAT Leon has always been a core pillar in the brand’s vehicle line-up, and a reference point for the segment, proven by its more than 2.2 million units sales over its three-generation life.

The SEAT Leon is our best-selling model and we want to continue its great track. Therefore SEAT has invested more than 1.1 billion euros in the all-new SEAT Leon, mainly in the vehicle development and in the improvement of the production facilities. 2019 has been a record year for the company. We have sold more than 570,000 cars, the highest volume in our 70 years of history and we have achieved one of the best production figures ever, as we produced more than 500,000 cars in Martorell. A great basis to start this 2020

—Carsten Isensee, SEAT’s Acting President and Vice-President for Finance and IT

The all-new SEAT Leon is designed, developed and produced in Barcelona, at the brand’s Martorell facilities.

Hyundai has a good idea, gas, hybrid, PHEV, EV all in the same model.