In addition to harmful gases such as carbon monoxide, air pollution contains tiny particles that have been linked to health problems, including cardiovascular disease and asthma. Most studies have analyzed the potential health effects of larger-sized particulate matter (PM), such as particles less than 2.5 μm in diameter (PM2.5). Now, researchers in China report in an open-access paper in Environmental Science & Technology Letters that particles with diameters less than 1 μm (PM1) are even more strongly correlated with cardiovascular disease. 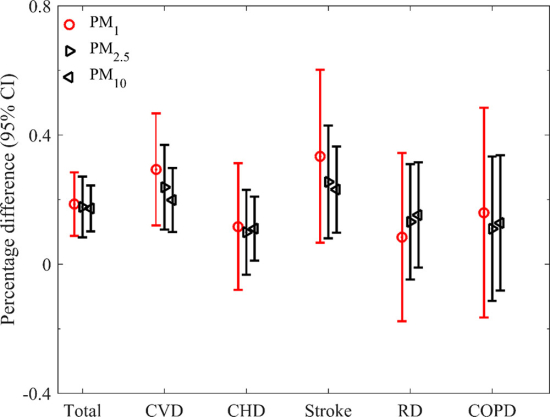 Zhaomin Dong, Maigeng Zhou and colleagues analyzed the data from 65 Chinese cities, to determine if PM1 exposure correlated with the number of non-accidental deaths in each city during the same time period.

The finer PM1 could more easily deposit in the lungs and circulation than larger particles, which might explain the increased health risks, the researchers say.

The authors acknowledge funding from the Ministry of Science and Technology of the People’s Republic of China, the National Natural Science Foundation of China and the Fundamental Research Project of Beihang University.

I wonder why the link between compromised health and immunity to respiratory disease such as the current corona repiratory virus isn't even discussed. Many disease epidemics have originated in locaions where there are contributing challenging environmental factors canary in the mine? Do we need another study to investigate the obvious. Is it unscientific to draw such conclusions from established understanding?