Location technology specialist, TomTom (TOM2), released the latest results of the TomTom Traffic Index, a report detailing the traffic situation in 416 cities in 57 countries. Overall, traffic congestion has increased globally during the last decade, and the 239 cities (57%) TomTom included in the new Traffic Index report had increased congestion levels between 2018 and 2019, with only 63 cities showing measurable decreases. 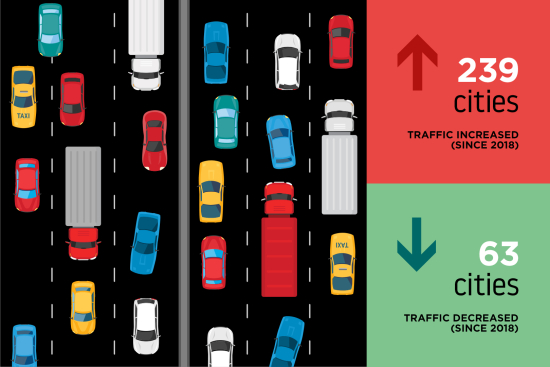 This global increase in congestion, despite being an indicator of a strong economy, is understood to cost economies billions.

Globally, there’s a long road to travel until congestion levels are brought under control. In time, the rise of autonomous vehicles and car-sharing services will help alleviate congestion, but planners and policymakers can’t afford to sit and wait. They need to use all the tools available to them to analyze traffic levels and impacts, so they can make critical infrastructure decisions. And drivers have a role to play too. Small changes in driving behaviors can make a huge difference.

Bengaluru takes the top spot this year with drivers in the southern Indian city expecting to spend an average of 71% extra travel time stuck in traffic. Next in the global rankings are Philippine capital, Manila (71%); Bogota in Colombia (68%); last year’s most congested city, Mumbai (65%); and Pune (59%), also in India; making up the top five most congested cities in the world.

The TomTom Traffic Index report is available online, is interactive, and allows visitors to explore the traffic situation in their own city, with live traffic information helping them to make better travel decisions.