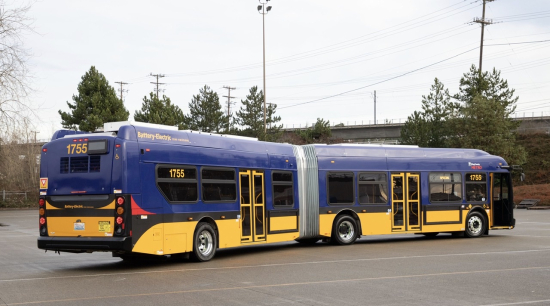 Upon execution of the purchase agreement with Metro, the order will be added to New Flyer’s backlog.

Metro’s agreement to purchase up to 120 new battery-electric buses, starting with the initial order of zero-emission articulated buses, was announced by King County Executive Dow Constantine alongside Metro General Manager Rob Gannon, during an event and bus demonstration at Metro’s South Training Facility in Seattle, Washington.

The announcement follows Metro’s 2018 electric bus evaluation program, which used New Flyer’s Xcelsior CHARGE buses, and is a major milestone in the county’s efforts to improve air quality, reduce carbon and create a zero-emissions bus fleet by 2040 or earlier.

In 2017, Executive Constantine and Metro General Manager Rob Gannon called on the industry to invest more in battery-electric options, including the creation of coaches that could travel farther and handle the varying terrain requirements of the region.

New Flyer stepped up to the challenge, producing both a 40-foot and 60-foot battery-electric bus that met Metro’s specifications and timeline needs. The buses Metro will purchase both have a battery size of 466 kWh.

Since 1979, New Flyer has delivered more than 1,800 buses to Metro, with more than half comprising zero-emission or hybrid-electric powertrains.