AutoFlightX is the fourth investment by the TDK corporate venture capital (CVC) fund since its July 2019 launch with a mission to invest in innovative startups focusing on digital and energy transformation and contributing to sustainability. 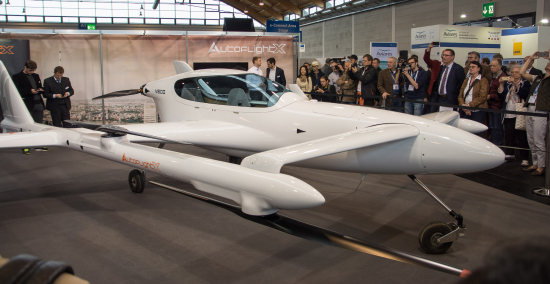 According to TDK Ventures’ Managing Director Nicolas Sauvage, the CVC sought companies that combine avionics and drone expertise with strong unit economics, paired with solid business models in the eVTOL space. For TDK Ventures, the ideal company would unlock a spectrum of use cases in inspection, cargo delivery and emergency responses, all without requiring an installed charging infrastructure base.

AutoFlightX’s 50 kg platform can carry payloads of up to 20 kg and has a flight time of two to five hours continuous cruise. The company also has a pipeline of platforms that will carry up to 300 kg and can fly two to five hours, depending on the payload.

We believe AutoFlightX’s innovations reflect a combination of the best consumer drone talent from China paired with the aviation engineering rigor of Germany.

Tian Yu, who is the former founder and CEO of Yuneec, started AutoFlightX in 2018 with a vision to transform air mobility. Yu subsequently assembled a world-class team of more than 100 engineers in Munich, Shenzhen and Shanghai to leverage the best of consumer drones and aviation with the goal of building the highest energy-efficient eVTOL vehicle.

The AutoFlightX team explored customer pain points in traditional industries such as mining, oil and gas and emergency response. In such scenarios, consumer drones didn’t satisfy the needs for vertical take-off, long-duration cruise and hovering while carrying large payloads, so the company began developing an eVTOL solution.

AutoFlightX has already signed on several customers in the mining and inspection industries with their V40 Whiteshark platform that can carry up to a 20 kg payload. The AutoFlightX team has also recently completed their first full maiden flight of a 300 kg platform, which can deliver medicine and other time-sensitive supplies of up to a 100 kg payload.

A 1000 kg platform is currently under development, with plans for initial flights in 2020. AutoFlightX believes their 1000 kg platform will ultimately pave the path to air taxis, which will hold up to four passengers and have a range of >300 km with a single charge.