Wright Electric announced the start of its electric propulsion development program for its flagship 186-seat electric aircraft, named Wright 1. In order to achieve the commercial flight capability of the Wright 1, Wright is engineering electrical systems at the megawatt scale by building a 1.5 MW electric motor and inverter at 3 kilovolts.

Wright intends to conduct ground tests of its motor in 2021 and flight tests in 2023. The company expects entry into service of its flagship Wright 1 in 2030. 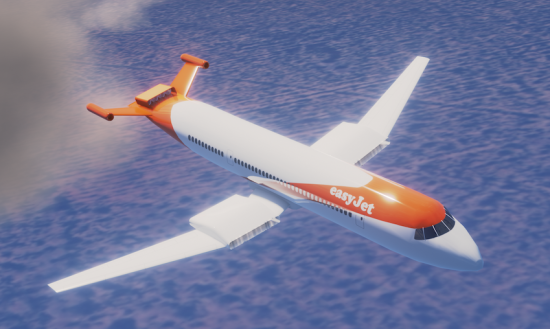 The motor and power system development program is the next step towards building its narrowbody-class aircraft. Wright will be simultaneously conducting tests on its fuselage to improve aerodynamics. Numerous government agencies in the United States are funding research into electric aviation including NASA and Air Force Research Laboratory.

On 30 January, Wright demonstrated a preview of its electric motor at its press event in New York, NY. Wright also announced that it is moving its headquarters to Albany, NY to take advantage of the engineering talent there.

easyJet, Europe’s leading airline and partner to Wright Electric, welcomed this announcement as easyJet has a long tradition of efficient flying. Through their dedication to choosing efficient aircraft and their approach to flying them, they’ve already become more efficient than many airlines. Since 2000, easyJet has reduced the carbon emissions for each kilometer flown by a passenger by over one-third (33.67%) and has a target to reach a 38% reduction by 2022. easyJet also became the first major airline to offset the fuel from all of its flights. Their priority is to continue reducing their carbon footprint in the short-term while they support the development of innovative technology to accomplish their long-term goal of carbon-free aviation, which Wright is making possible.

This is another crucial step for our partner Wright Electric to move towards the introduction of commercial electric aircraft and it is exciting to see their ambitious timeline for testing and entry into service.

Battery technology is advancing at pace with numerous US government agencies now funding research into electric aviation—all of these developments help us to more clearly see a future of more sustainable operations.

We know it is important to our customers that we operate as sustainably as possible—our carbon offsetting programme has been positively received by our customers and we have now offset more than nine million passenger journeys—but we are clear this is an interim solution until new technologies become available and we can see more clearly than ever a future that is not exclusively reliable on jet fuel.

Without some magic new battery I can't see this.

And 'breakthroughs' have been ten a penny, but they remain at the end of the rainbow.

One way is to have two turbines and a motor on the tail to help climb.
The turbines can be smaller with alternators to charge batteries.

Electric aircraft propulsion has some severe limitations that are not readily apparent to the layman. Today's gas turbine engines use the heat of combustion not just to drive the turbine, but to raise the tailpipe temperature. A higher temperature has a higher speed of sound. The speed of sound being the limiting factor in discharge velocity. If the discharge air is cold, such as an electric motor, driving a fan or prop while at the frigid temperatures of high altitude cruise, the discharge velocity is limited to speeds far lower than today's current cruise speeds!

The secret to high speed cruise has always been significant heat. An afterburner (reheat) is a great example of one way to achieve a high duct discharge velocity. Another way is to use the heat of compression of a multi stage low bypass fan, then mixing the hot air with the very hot exhaust of, you guessed it, really hard running and hot turbines.

Limiting speed to 350 MPH as is typical with electric drive, greatly increases the time required to travel a specific distance. Remember, it's not unusual to see 100mph headwinds at cruise altitudes. Batteries won't be up to the task. Gas turbine engines will.

NOTE: a G550 corporate jet can fly at 4000 feet altitude, with an EPR (engine pressure ratio) of just 1.03 and be going 250 MPH. Very little duct pressure, but lots of heat, increasing the volume and discharge velocity. Doing the same with electric drive and no heat, will require an EPR (inlet to exhaust pressure) of 1.50. In other words, lots of electrical power.

cujet:
Thanks for your nattering nabobish comment, but electric flight promises to cut the price of a ticket by a factor of 4 or 5. Short hops are already physically possible, so I think it's only a matter of developing planes and commercialising them. Maintenace costs for electric motors is also a fraction that of jet engines. Batteries located in wings get free cooling. Short hops have much less tendency to be affected by headwinds.
Don't worry about crossing the pacific at this point. Realize that for NYC to Boston or Philly to DC kind of flights, this is a winner, hands down, no comparison. And it absolutely destroys high speed rail, BTW.
Far greener, far cheaper, fact.

The Wright's engine tech can be used with hydrogen or ammonia derived power for long haul.

They don't get any cooling at all under their max-discharge condition of takeoff power at the start of the runway, and are at low speed during intial climb.

Here's a dollar, buy a clue.

Needless?  Gross errors of thought NEED to be called out, as they are extremely damaging if believed.

And yes, insults DO need to be given to people who fail to put requisite thought into what they say.  That goes double for thoughts expressed in writing, which requires more effort and should have greater care exercised in the creation.

Why not install an electro-magnetic catapult in the runway for takeoff to assist electric planes to get airborne?

My understanding is that the US Navy is having a great deal of trouble trying to do that on its new carriers.  Doing it on civilian runways would probably add even more problems.

It would make more sense to beam microwave power to the aircraft, because you could keep it powered well past the takeoff roll.

cujet: electric drive is not limited to 350mph. The Tupelov TU-114 achieved speeds of 540mph, similar to turbofan jets and used a turboprop with power to weight of a little over 3.8kw/kg. Radial flux electric motors have achieved 15kw/kg and will achieve 20kw/kg with superconducting windings. True, batteries aren't there yet but PEM fuel cells and cryo-compressed hydrogen are.

EP: Could the rather short runway on a carrier be one of the major problems confronting the Navy for such a solution? If so, that would not pose an obstacle on a civilian runway.

When you talk about piston engines and aircraft, consider this concept:

A combination of a diesel engine, as the Napier Nomad concept but more up-to-date, and further development of the propfan could work. It would be more fuel-efficient than current jet engines and offset the higher engine weight by the carrying less fuel. However, problems such as, e.g., noise and the relatively low cost of jet fuel today are probably prohibitive. The point is that a piston engine propelled aircraft could perhaps be brought up to modern standards, without too much sacrifice of speed and altitude in the flight. Problems might lie in lack of know-how by jet engine manufacturers for both mentioned technologies and the willingness to allocate resources for such a project.

Recall that Junkers Jumo 205-208 was an aircraft diesel engine superior in many aspects to aircraft gasoline engines during WWII. Similar concepts have been proposed in recent time, but instead, I would like to highlight the advancements of Achates, as an example for technology based on a similar concept. Germany lost WWI and much know-how was lost, jet engines came along, cheap jet fuel was available, and Napier did not have the resources to develop their concept further.

However, problems such as, e.g., noise and the relatively low cost of jet fuel today are probably prohibitive.

This is very much true.  Back a few decades ago, there was research into unducted fans/"propfans".  These had wide, highly-swept blades in order to prevent the formation of shock waves and consequent wave drag and noise at the high Mach numbers required of current airliners.  The first tests showed fuel savings as much as 30%, but noise has apparently prevented them from achieving any traction in the West.  Measures like scalloped turbofan exhausts have been adopted instead; these reduce efficiency but cut noise even more.