Researchers in Israel have designed a separate-cell photoelectrochemical (PEC) water-splitting system with decoupled hydrogen and oxygen cells for centralized hydrogen production. A paper describing their system is publishedin the journal Joule.

Inspired by natural photosynthesis, photoelectrochemical (PEC) water splitting that combines light harvesting and electrochemical conversion of electrical power to chemical energy stored in hydrogen bonds, wherein both functions are carried out concurrently at the solid/liquid interface between a semiconductor photoelectrode and water, aims at providing a competitive solution for solar energy conversion and storage.

… The present work complements our earlier study, in which the conceptual idea of cell separation was proposed and demonstrated in a purely electrolytic setup, demonstrating a benchtop-scale separate-cell tandem PEC-PV device for decoupled photoelectrochemical water splitting in separate oxygen and hydrogen cells. It addresses the challenges of designing, building, and optimizing the device for assessing large-scale hydrogen generation.

The oxygen cell contains two 100 cm2 back-to-back hematite photoanodes, placed in tandem with Si PV mini-modules that provide the necessary bias for driving unassisted solar water splitting. The hydrogen cell contains the cathode, and it is physically separated from the oxygen cell. Battery-grade nickel hydroxide electrodes are placed in both cells to mediate the ion (OH–) exchange between the cathode and anode. Successful operation of this prototype system was also demonstrated in outdoor conditions with natural sunlight.

In short, the decoupled system addresses one of the greatest challenges in large-scale PEC water splitting: the collection of hydrogen gas from millions of PEC cells distributed in the solar field. 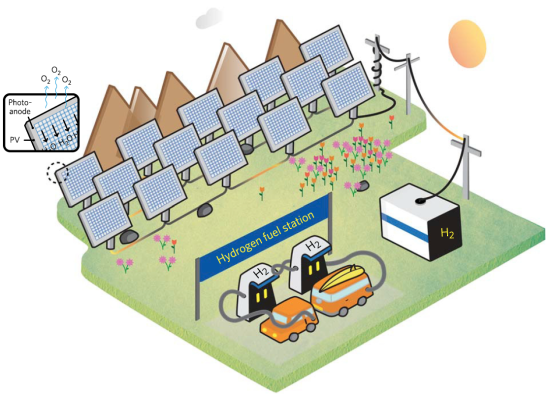 The ion exchange between the cathode and anode in the new system is mediated by nickel (oxy)hydroxide auxiliary electrodes, thereby enabling physical separation of the two cells. 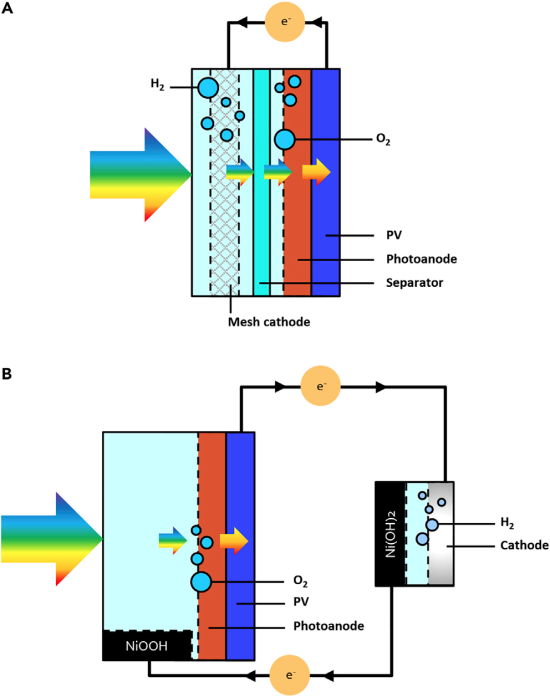 Photoelectrochemical Water Splitting Cell Architectures. (A) Conventional single-cell configuration of a PEC cell comprising a photoanode-PV tandem stack and cathode, separated by a membrane or diaphragm. (B) Separate-cell configuration for decoupled PEC water splitting with an oxygen-producing tandem PEC-PV cell and a hydrogen producing electrolytic cell connected to each other electrically. Landman et al.

The oxygen cell comprises a PEC-PV tandem stack of hematite photoanodes connected in series to a silicon photovoltaic (PV) mini-module, whereas the hydrogen cell is an electrolytic cell with a platinized titanium mesh cathode.

The operating conditions of the system components and their configuration were optimized for daily cycles, and ten 8.3 h cycles were carried out under solar simulated illumination without additional bias at an average short-circuit current of 55.2 mA.

The results, said the researchers, demonstrate the successful operation of a decoupled PEC water splitting system with separate hydrogen and oxygen cells.

Here are some other links I have on separate oxygen and hydrogen production
https://www.sciencedaily.com/releases/2017/03/170313192723.htm
https://newenergyandfuel.com/http:/newenergyandfuel/com/2017/03/22/separate-cells-for-hydrogen-and-oxygen-in-water-splitting/
https://www.nature.com/articles/nmat4876