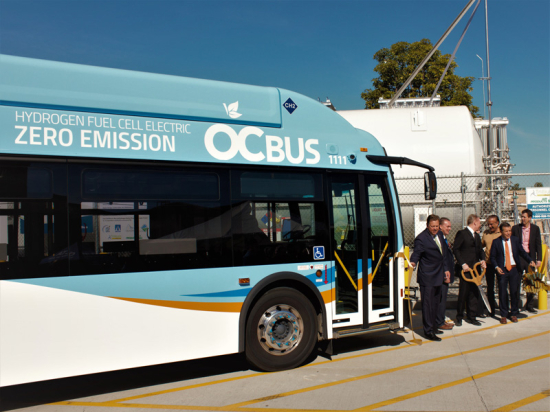 The hydrogen-fueled buses will be strategically integrated into the OC Bus fleet to operate in communities that serve disadvantaged populations. OCTA is also in the process of purchasing 10 plug-in battery electric buses, which are expected to be in operation beginning in 2021.

New Flyer fuel cell buses use a battery-dominant hybrid architecture, in which the batteries are large enough to handle all vehicle performance needs while the fuel cell acts as a continuous battery charger to extend the range of the vehicle. Fuel cells do not have a need for replacement or lengthy recharging when its fuel is spent. Additionally, since fuel cells store their fuel in external storage tanks, the maximum operating range of a fuel cell-powered device is limited only by the amount of fuel that can be carried.

In addition to launching the ten Xcelsior CHARGE H2 buses into service, OCTA also debuted the largest hydrogen fueling station in the US for public transportation, showcasing its $22.6-million investment in zero-emission transit.

New Flyer has delivered nearly 10,400 buses into the State of California, and has more than 200 on order or pending delivery over the coming year.

OCTA and New Flyer are partners in the Fuel Cell Electric Bus Commercialization Consortium project (FCEBCC) funded by CARB through the statewide initiative known as California Climate Investments (CCI). To date, the funding award of $12.47 million is the largest single grant from CARB to a transit agency, supporting CARB’s statewide mandate that public transit agencies transition to 100 percent zero-emission bus fleets by 2040.