In Norway, Asko begins piloting use of hydrogen fuel-cell trucks

Norwegian wholesaler Asko is among the first to operate a goods vehicle that runs on hydrogen, thanks to a collaborative effort by research scientists and industry. SINTEF, one of Europe’s largest independent research organizations, has been working with Asko and hydrogen fuel for almost ten years with the aim of reducing goods vehicle emissions. 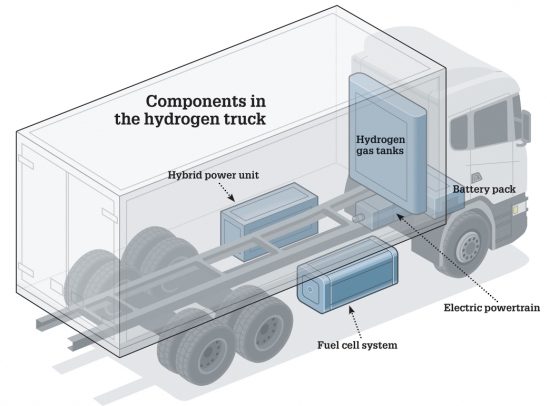 The truck, developed in cooperation with Scania, features a 290 kW electric motor (210 kW continuous); a 2-speed transmission; 2,200 N·m peak torque; a 56 kWh Li-ion battery; and a 90 kW PEM fuel cell. The on-board charger is 22 kW AC with CCS charging interface, and hydrogen storage is 33 kg @350 bar. The vehicle can travel between 400 and 500 kilometers on a single refueling.

The aim here is not to use hydrogen for all goods transport. Battery power is in fact a more economical solution for light goods transport in urban areas.

In February, Asko will be operating four trucks running on hydrogen fuel. A fully developed fuel cell technology did not exist when ASKO launched this project, nor was there any mass production of such vehicles.

Calculations made by SINTEF have shown that provided the authorities put proactive measures in place, Norway could have 10,000 heavy hydrogen-powered vehicles on the roads by 2030.

In order to facilitate widespread heavy goods transport using hydrogen-powered vehicles it is important to fund the installation of hydrogen fuel stations and ensure the continuance of road toll exemptions.

Asko’s aim is to achieve zero emissions from its 600 goods transport vehicles by 2026 – facilitated by battery-generated electricity and hydrogen. Pilots will be run in 2020 to test the technology, vehicle ranges and load capacities.

In addition to solar, Asko is a major industrial wind power producer. The company operates ten wind turbines and envisages expanding its hydrogen fuel production using some of these turbines in the Agder and Rogaland areas.

Asko will then be operating two hydrogen production centers supplying fuel to meet the needs of its vehicles in both south-west and mid- and northern Norway.

The aim here is not to use hydrogen for all goods transport. Battery power is in fact a more economical solution for light goods transport in urban areas.

About time somebody stated this in so many words.

I like their approach.
They are making what works, when it works, and adapting what they are doing as the technologies progress.

As they say, batteries work fine for local deliveries.
They can't touch the energy density of a hydrogen fuel cell system for longer runs and bigger loads though.

In Europe long distance can be done for heavy goods in my view,
In the States a long run is much longer, and I don't think even a hydrogen truck can manage to be up there with diesel.

I don't believe a word of it.

And the Tesla class 8 long range semi seems to be morphing to short range, as others already produce.