Researchers at the NYU Tandon School of Engineering, led by Miguel Modestino, professor of chemical and biomolecular engineering, and Lawrence Berkeley National Laboratory have developed a novel ion-conducting polymer (ionomer) that increases the power and lowers the cost of fuel cells.

The material delivers copious amounts of oxygen from the atmosphere to the cell’s electrode reaction sites—generating more power—while reducing the amount of expensive materials such as platinum needed in fuel cells, potentially solving a major industry challenge. A paper on their work is published in the Journal of the American Chemical Society.

These structural changes slightly reduce proton conductivity while significantly improving gas permeability. According to the researchers, substantial performance improvement could be achieved by incorporating highly permeable ionomers as the functional catalyst binder.

These results underscore the significance of tailoring material chemistry to specific device requirements, where ionomer chemistry should be rationally designed to match the local transport requirements of the device architecture. 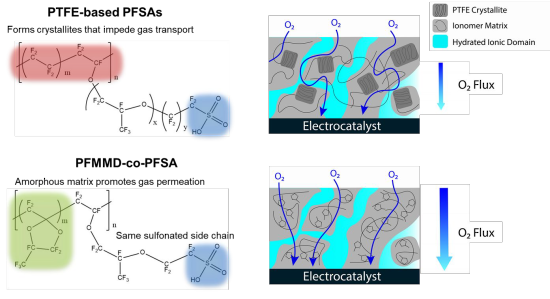 Traditional PFSAs such as Nafion (top) consist of a semicrystalline PTFE matrix and a sulfonated pendant side chain. Crystallinity in the matrix results in low gas permeability, which induces substantial mass-transport limitations in fuel cells. PFMMD-co-PFSA (bottom), the novel ionomer developed at NYU, incorporates an amorphous dioxolane group in the matrix to disrupt crystallinity and improve gas permeability. The ionomer contains the same characteristic sulfonated side chain to preserve the mechanism for ion conduction in traditional PFSAs. Credit: ACS, Katzenberg et al.

The researchers—including Yoshi Okamoto, a professor of chemical engineering and director of the Polymer Research Institute at NYU Tandon, and Ph.D. student Adlai Katzenberg, who did the research as part of a US Department of Energy fellowship—solved several problems at once by swapping the linear PTFE polymer chains with a bulky fluorinated chain, which added more free volume to the matrix, vastly enhancing its ability to transport oxygen in fuel cells.

We’ve created a novel copolymer—two components bound together. One part conducts ions, and the other is highly permeable to oxygen. Okamoto had been working on highly permeable polymers for gas separation processes. When I joined NYU Tandon, we realized that the polymers that he had developed could be adapted to improve fuel cells.

This research was supported by a grant from United States Department of Energy.