Alstom will manufacture, deliver and maintain until 2032 eleven Coradia Continental battery-electric trains for regional traffic on the Leipzig-Chemnitz route on behalf of VMS (Verkehrsverbund Mittelsachsen) and with the support of ZVNL (Zweckverband für den Nahverkehrsraum Leipzig), the two authorities responsible for this line. 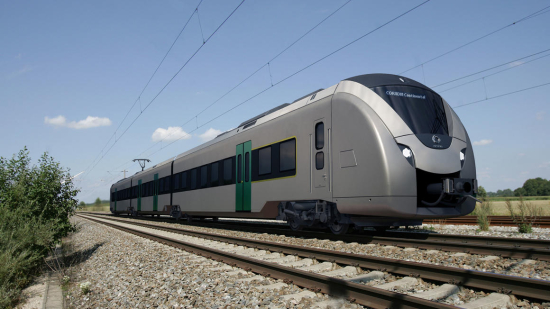 The contract is worth approximately €100 million. Following this order, Alstom offers all types of traction systems on the market as well as the full range of emission-free drives, from efficient electric motors to hydrogen fuel cells and advanced battery traction.

Alstom has signed two contracts for hydrogen-fuel-cell-powered trains. The first one is for 14 trains in the German region of Lower Saxony. (Earlier post.) The second one, also in Germany, for 27 trains to the Frankfurt metropolitan area.

In 2014, Alstom had previously signed a contract with VMS for the delivery of 29 Coradia Continental electric regional trains (EMU). In order to bridge the 80 kilometers of non-electrified line between the cities of Chemnitz and Leipzig, the authority requested a battery-electric version (BEMU).

The new trains will enter service in 2023. They will be built at Alstom’s German site of Salzgitter, in Lower Saxony. The battery traction sub-system is designed and supplied by Alstom’s traction center of excellence in Tarbes.

The Coradia Continental BEMU trains will be similar to those already in service on the Dresden, Riesa and Zwickau routes. The main difference: they will also have high-performance batteries on the roof. The train, based on the proven Coradia Continental, builds on Alstom’s long experience in battery traction, gained with the Coradia iLint, Citadis trams and the Prima H3 locomotive.

The Coradia Continental BEMU has a range of up to 120 kilometers and can be operated under catenary as well as on non-electrified sections. The three-car-trains will be 56 meters long and equipped with 150 seats. They will have a top speed of 160 km/h in battery mode. The capacity of the batteries (high-power lithium-ion) is calculated to ensure catenary-free operation of the line Chemnitz-Leipzig without any sacrifice in performance or comfort.

Alstom’s Coradia range allows operators and transport authorities to offer their passengers regional trains that meet their needs and expectations, while demonstrating exemplary reliability and cost-effectiveness. Alstom has tailored the Coradia range to operate with all available emission-free power systems, from electric to battery-electric and hydrogen fuel cells.

The latter, the Coradia iLint, powered by fuel cells and offering performance comparable to a diesel train while emitting nothing but water, has been in passenger service in Germany for more than a year.