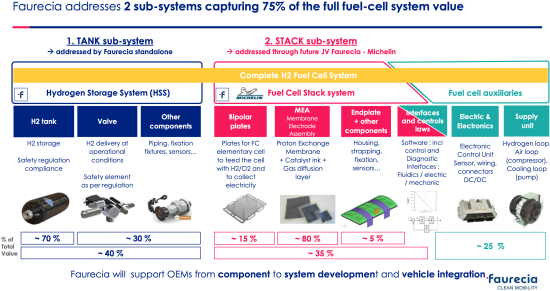 Over a four-year period, Faurecia will equip around 1,600 Hyundai heavy-duty trucks that will be afterwards delivered to Hyundai Hydrogen Mobility in Switzerland, a newly-created joint venture between Hyundai and H2 Energy to spearhead hydrogen mobility in Europe. (Earlier post.)

Fuel cell electric vehicle technology will become significant in the powertrain mix in the next ten to fifteen years in particular for commercial vehicles. Faurecia is investing significant resources in optimizing the potential of this technology and creating the best-in class ecosystem to accelerate its deployment. This award, along with the joint venture we have created with Michelin to offer a unique range of hydrogen fuel cell systems, is a major step in our commitment to become the leader in fuel cell systems.

In June 2019, Faurecia announced the creation of a global center of expertise for hydrogen storage systems at its R&D center in Bavans, France. Faurecia is developing new-generation high-pressure tanks that are more efficient and lighter, as well as in a test center to characterize these tanks. 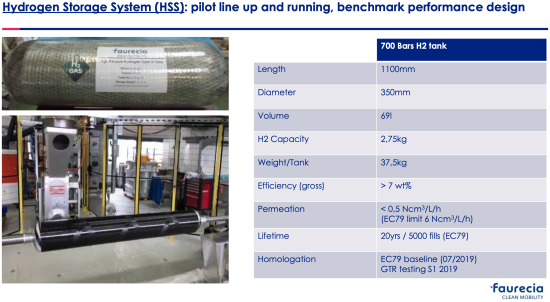 The center, scheduled to start operations in the second-quarter 2020, represents a total investment of approximatively €25 million, including €4.9 million in subsidies from the Bourgogne-Franche-Comté region. In the long term, Faurecia plans to create 50 highly qualified jobs at the Bavans site, which already has nearly 750 employees dedicated to Faurecia’s Clean Mobility activity.

Fuel-cell electric vehicles offer an attractive and complementary alternative to battery-electric vehicles. The range and refueling time of fuel-cell trucks should be equivalent to diesel ones while being completely emissions-free. By 2030, it is estimated that at least 2 million new vehicles, and more than 350,000 commercial vehicles, will be equipped with fuel cell technology, according to Faurecia.