In the last quarter of 2019, EU demand for diesel cars further decreased, dropping to 29.5% of new-car registrations, according to data from ACEA, the European Automobile Manufacturers Association.

Gasoline cars accounted for 57.3% of the EU market, while electrically‐chargeable vehicles (ECV) made up 4.4% of total new car sales across the region from October to December last year. All alternatively‐powered vehicles (APV) combined held a market share of 13.2%. 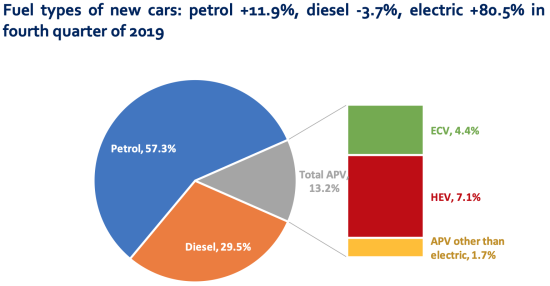 From October to December 2019, the number of diesel cars registered across the European Union fell by 3.7% to 1 million units. Despite this overall decline, some markets are starting to show signs of recovery.

At the same time, gasoline cars continued their upward trend, increasing by 11.9% (or 216,289 units) compared to the fourth quarter of 2018. Gasoline car sales grew in all 28 EU countries, with Italy recording the highest percentage increase (+20.9%) of the five major markets. The Central European countries also provided an important boost (up 23.0% from October to December 2019).

During the fourth quarter of 2019, demand for alternatively‐powered cars grew significantly (+66.2%) across the EU. Electrically‐chargeable vehicles (ECV) were among the main drivers of this growth (+80.5%; 155,572 units in total), with both the battery‐electric segment (BEV) and plug‐in hybrids (PHEV) posting strong gains (+76.5% and +86.4%, respectively).

Hybrid electric vehicles (HEV) still account for the vast majority of alternatively‐powered vehicles sold in the EU. Indeed, 253,604 units were registered during the fourth quarter (+69.8% compared to 2018).

Other alternatively‐powered vehicles—which include those running on ethanol (E85), liquid petroleum gas (LPG) and natural gas (NGV)—also ended the year on a positive note. Registrations increased by 28.0% to 58,768 units in the last quarter of 2019. Italy remains the largest market for these vehicles in the EU, with 41,905 units registered.

Looking at the five major markets, all of them posted strong growth in total APV registrations from October to December 2019. Germany stood out as demand more than doubled (+101.9%) during the fourth quarter, driven by sales of both plug‐in hybrids and hybrid electric vehicles.

When fuel is expensive you want better mileage.

@SJC, fuel has been expensive in Europe for decades, and so people (used) to drive smaller cars than the US.
However, they are moving to SUVs (mainly 2WD ones like the Hyundai Tuscon and Nissan Qashqai and so the fuel consumption is going up.
Also, diesel is now out of favour, especially in cities, so many people are switching to petrol engines (probably GDI), which is as bad for the environment.
Electric cars are too expensive up front for most people.
The Toyota Corolla Hybrid seems to be doing well, which is god news.