Global consulting firm AlixPartners’ Global Autonomous Vehicle Report—based on a survey of more than 6,500 consumers across China, France, Germany, Italy, the United Kingdom, and the United States—found that consumers are willing to spend just an 8% to 24% premium for “hands-off-the-wheel” autonomy over today’s already-available technologies (lane-keeping assistance, automatic braking, etc.). The results ranged from Germany’s 24% down to 8% in China. Americans surveyed said they’d be willing to pay just a 9% premium—or $1,868 versus $1,709.

At the same time, the survey results also suggest enthusiasm for autonomous robot-taxis. When asked if they’d be willing to consider switching from personal-vehicle ownership to using autonomous-vehicle ride-hailing services, or “robotaxis,” if the monthly cost were from 40% cheaper to even 20% more expensive than vehicle ownership, 44% to 84% across the six countries said they would. 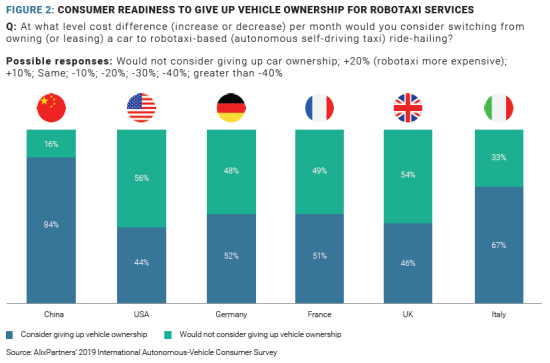 Consumers in China, the world’s largest auto market, were the most enthusiastic, at 84%. In the US, 44% said they’d consider swapping their personal vehicle for ride-hailing under such circumstances.

While AVs represent a whole new platform for mobility, companies venturing into this space—new-entrants as well as the traditional auto industry—should be taking a clear-eyed look at their pathway to a viable business model, including perhaps partnering with others to reduce risk on their autonomous-vehicle programs.

—Mark Wakefield, global co-leader of the automotive and industrial practice at AlixPartners

The AlixPartners survey also found that large percentages of consumers who self-identified as likely buyers of higher-level, personal-use AVs said they’ll wait five or more years after widespread availability to buy one. Those results ranged from China’s 51% up to 81% in the UK. Seventy-nine percent of Americans said they’d wait five years or more.

Consumers in the survey were also generally less than sanguine about the safety of AVs. Though 58% of Chinese said they were confident in higher-level AVs’ ability to navigate safely from one place to another, responses in the other five countries ranged from 36% down to just 18%. Twenty-seven percent of Americans surveyed said they’re confident.

The AlixPartners report also contains an analysis showing a correlation between the countries with lower gross domestic products per capita and a higher willingness to consider switching from vehicle ownership to ride-hailing AVs. China is by far in the lead in that regard.

Many of the survey responses—from the highest interest in robotaxis to the highest confidence in AV safety—suggest that China could become the epicenter for ‘all things AV’ in the future. Given China’s size alone, that puts all the more pressure on industry players everywhere to make smart, well-thought-through moves—and to make them soon, before it’s too late.