During the first charging process of a new Li-ion battery cell, trace amounts of electrolyte components decompose sacrificially to form what is called a solid–electrolyte interphase (SEI) on the anode surface. The SEI functions both as a Li+ conductor and an electronic insulator, and prevents sustained electrolyte decomposition during subsequent cycles. The properties of the SEI predetermine a series of key properties of the battery, including include accessible capacity, cycling stability, rate capability and safety over the course of the cell’s lifetime.

Because of the importance of the SEI, researchers have tapped multiple techniques to learn more but up until now have not witnessed its creation at a molecular level. Now, in a paper published in the journal Nature Nanotechnology, an international team of researchers present a dynamic picture of the SEI formation in lithium-ion batteries using in operando liquid secondary ion mass spectrometry in combination with molecular dynamics simulations.

Knowing more about the SEI is a crucial step on the road to creating more energetic, longer-lasting and safer lithium-ion batteries.

The team was led by researchers at the US Department of Energy’s Pacific Northwest National Laboratory (PNNL) and the US Army Research Laboratory (ARL).

The team used PNNL’s patented technology to analyze the SEI structure as it was created. Scientists used an energetic ion beam to tunnel into a just-forming SEI in an operating battery, sending some of the material airborne and capturing it for analysis while relying on surface tension to help contain the liquid electrolyte. Then the team analyzed the SEI components using a mass spectrometer.

The patented approach, known as in situ liquid secondary ion mass spectrometry or liquid SIMS, allowed the team to get an unprecedented look at the SEI as it formed and sidestep problems presented by a working lithium-ion battery. The technology was created by a team led by Zihua Zhu, building on previous SIMS work by PNNL colleague Xiao-Ying Yu.

Our technology gives us a solid scientific understanding of the molecular activity in this complex structure. The findings could potentially help others tailor the chemistry of the electrolyte and electrodes to make better batteries.

The PNNL team connected with Kang Xu, a research fellow with the US Army Research Laboratory and an expert on electrolyte and the SEI. The scientists confirmed what researchers have suspected—that the SEI is composed of two layers. But the team went further, specifying the precise chemical make-up of each layer and determining the chemical steps that occur in a battery to bring about the structure.

The team found that one layer of the structure, next to the anode, is thin but dense; this is the layer that repels electrons but allows lithium ions to pass through. The outer layer, right next to the electrolyte, is thicker and mediates interactions between the liquid and the rest of the SEI. The inner layer is a bit harder and the outer later is more liquidy, a little bit like the difference between undercooked and overcooked oatmeal. 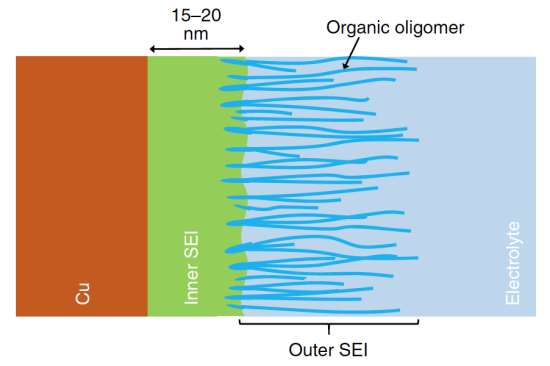 An SEI model based on the observations in the study. The SEI can be divided into two parts: an inner SEI and an outer SEI. The inner SEI is continuous, dense and impermeable to electrolytes, and it is most probably composed of Li2O. The outer SEI is mainly composed of loose organic oligomers that result from the degradation of solvent molecules. The loose outer SEI is permeable to electrolytes.

One result of the study is a better understanding of the role of lithium fluoride in the electrolyte used in lithium-ion batteries. Several researchers, including Kang Xu, have shown that batteries with SEIs richer in lithium fluoride perform better. The team showed how lithium fluoride becomes part of the inner layer of the SEI, and the findings offer clues about how to incorporate more fluorine into the structure.

The PNNL portion of the research published in Nature Nanotechnology was funded by PNNL, DOE’s Office of Energy Efficiency and Renewable Energy’s Vehicle Technologies Office, and the U.S.-Germany Cooperation on Energy Storage. Kang Xu’s work was funded by DOE’s Office of Science Joint Center for Energy Storage Research. The liquid SIMS analysis was done at EMSL, the Environmental Molecular Sciences Laboratory, a DOE Office of Science user facility located at PNNL.