The BMW X5 and the BMW X6 now also offer 48V mild-hybrid technology to optimize the spontaneous power delivery and effectiveness of the drive system. 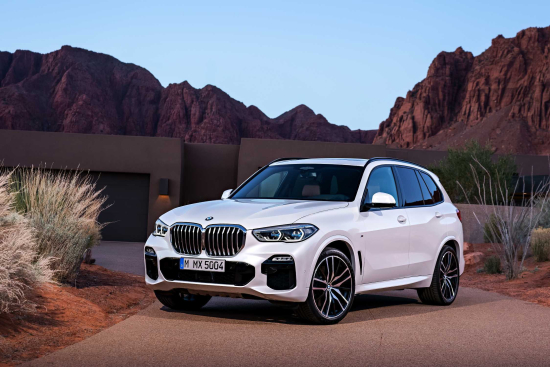 Thanks to the power output of the combustion engine being increased to 250 kW/340 hp, and the electrically assisted mild hybrid system, the superior forward thrust of the luxury-class Sports Activity Vehicle (SAV) and Sports Activity Coupe (SAC) is experienced even more intensively.

With up to 10 injections per cycle, the injectors feed fuel to the combustion chamber at a pressure of up to 2,700 bar. The new pressure sensor integrated into the injector ensures exceptionally precise dosing as well as favorable fuel economy and clean combustion.

The new diesel engine develops a maximum torque of 700 N·m becoming available between 1,750 and 2,250 rpm. The engine achieves a maximum power output of 250 kW/340 hp at 4,400 rpm. Whether on the road or on off-road terrain, power is transferred in the new BMW X5 xDrive40d and the new BMW X6 xDrive40d via an 8-speed Steptronic transmission and intelligent BMW xDrive four-wheel technology, which, with a rear-wheel accentuated set-up, enhances agility during dynamic cornering.

Two-stage NOx exhaust gas treatment, which was introduced as a standard feature on diesel models in 2012, has been further developed. This component, which is close to the engine, now comprises an oxidation catalyst converter and an SCR coating on the particulate filter. For optimum reduction of nitrogen oxide emissions a second dosage unit has been integrated at the outlet of the SCR system.

The new BMW X5 xDrive40d and the new BMW X6 xDrive40d now already comply with the mandatory regulations of the Euro 6d emission standard, which will not take effect until the beginning of 2021.

The new diesel engine is assisted by the 48-volt starter generator of the mild hybrid system. The additional electric output of 8 kW/11 hp promotes both spontaneous power delivery and effectiveness of the drive system. Electric boost enhances dynamics when starting and accelerating.

The new BMW X5 xDrive40d and the new BMW X6 xDrive40d are each able to sprint from 0 to 100km/h in 5.5 seconds. Thanks to the additional electric output, the combustion engine is able at constant speeds to run particularly frequently within an efficiency-optimized load range, thus reducing consumption peaks.

The starter generator obtains the necessary energy from the 48-volt battery, which also supplies all electric driving functions with power via the 12-volt vehicle electrical system. It is charged by means of recuperation during acceleration and braking phases and also through a targeted combustion engine load point increase.

As a result, it is also possible to not only disconnect the engine during the sailing phases, but also to switch it off entirely. In order to make use of the economizing effect as frequently as possible, the comfort-optimized sailing function is now no longer only available in the ECO-PRO mode, but also in the COMFORT mode of the Driving Experience Control feature.

It's too bad that BMW will not be bringing this fantastic technology to the US market. It is a classic example of what advanced and proven clean diesel technology can be!

For ~$100,000 that is the best they can do? Is this really an example of the best diesel can offer? It may be impressive as a science project but I think the market will quickly pass judgement on this offering.

Not sure that's what you mean to say--I'd rather not have my car accelerate spontaneously.

Could you not have double the 48V battery capacity, current capacity of the wires and end up with 30-40 hp (or is it kW - even better) in a flywheel motor within the gearbox. That should deliver enough "spontaneous" power to thrust these behemoths forward with a 4-cyl, 2.0 litre, 218 hp ICE. 218 hp is plenty for any sensible, sustained speed, and 40 hp "spontaneous" added power for quick accelerations.

I have a 325d with 4-cyl, 2.0 litre, 218 hp running on diesel. I routinely get 40 mph average and 50 mpg average on some trips. It's an absolutely marvelous engine with its combination of power and fuel economy. A little extra electrical oopmf to get it fast off the line and you'd have a much more economical car with nearly the same performance and, I would argue, cost to build. Limit max torque to 500 Nm electronically, and they could use the "small" ZF8-speed gearbox (ZFHP51) and same some money better spent on batteries and e-motor.

@Brian
I would say that a 3-liter engine actually provides too much power for this kind of vehicle. Moreover, state-of-the-art for a new twin-turbo 2-liter engine is around 250 hp and with some additional electrical power, you could come pretty close to the performance of a 6-cylinder engine.

Regarding NOx emissions, I would guess that this concept should be able to get >90% reduction of NOx in comparison to the Euro 6d (final) RDE limit. Actually, some BMW cars have already showed even lower levels in on-road emissions tests.