Rare earth elements (REEs) are vital materials for modern technologies. The US National Energy Technology Laboratory (NETL) is collaborating with the University of Kentucky and their subcontractor Virginia Tech to demonstrate a novel process for the extraction of REEs from coal using plasma. 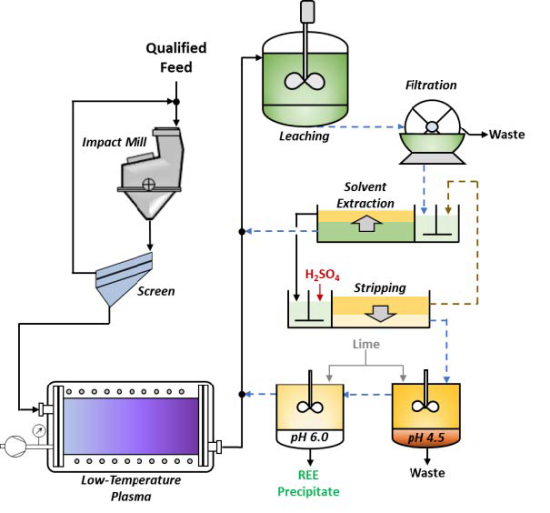 REEs, which represent the 15 elements of the lanthanide series plus scandium and yttrium, are used in the manufacture of smart phones, cars, television screens and defense technologies; windmills and other green energy equipment need these resources to function.

The “rare” in rare earth elements stem not from a scarcity of deposits, but rather in their sparse concentrations. The United States is at a historically low level in extracting and processing these highly valuable resources yet is a substantial consumer of the world market for REEs. However, domestic coal is of interest as a potentially abundant and easily accessible REE source in the US.

Appalachia’s coal, along with fly ash and acid mine drainage, contains recoverable REEs. Means of extracting them via hydrophobic-hydrophilic separation and acid leaching processes have shown some successes, and NETL remains committed to exploring all available avenues.

The overall objectives of NETL’s REE program are to demonstrate the techno-economic feasibility and performance of existing commercial or newly developed REE separation technologies. These technologies are focused on separating and recovering REEs from coal and coal by-products containing a minimum of 300 ppm total REEs, and concentrating the REEs to levels greater than or equal to 2% by weight, tentatively producing 90 to 99.99% high-purity, salable, individual rare earth metal oxides.

These objectives will be accomplished through laboratory REE separation projects and demonstration of concept feasibility at bench-scale through pilot- scale facilities and integrated processing systems. Ultimately, these efforts will ready REE separations technology for commercial deployment. Key success factors for this program include co-production of materials and critical elements, successful demonstration of environmentally benign processing, and competitive economics.

While searching for a reliable supply of these vital elements, we need to research all viable technologies to determine which are the most efficient and cost-effective. While we’ve seen several methods of extracting these resources from coal, the University of Kentucky’s low-temperature plasma research has been shown to be technically viable.

Plasma, which is distinct from the liquid, gaseous and solid states of matter, is formed by striking a gas with enough energy that gas molecules are ionized. During the past century, thermal plasma treatment saw applications in torch welding/cutting, spray coating, metal synthesis, extractive metallurgy, refining metallurgy, hazardous waste destruction and more.

The collaborators researched using low-temperature plasma to pretreat coal-based materials resourced from West Kentucky No. 13 and Fire Clay mines located within the state of Kentucky. Surface area measurements found that plasma treatment provided increased surface area and pore volume which made other processes more effective at recovering REEs. This novel technology integrated with traditional leaching and extraction processes was demonstrated to effectively recover REEs from the coal samples.

The higher recovery of rare earth elements using this method shows promise. It’s another potential tool at our disposal as we search for optimal ways to secure a reliable domestic supply of these crucial minerals. Moving forward, the challenge for NETL and its partners in academia is refinement and discovering how to make this process economically attractive by industry.

Why on earth would you want to try to get REEs from coal, when there is already so much coal ash out there conveniently separated from the hydrocarbon content?

A search shows coal ash to be up to 100 times that of the earth crust.