e-troFit is individually adapted to the customer’s requirements: Based on an analysis of the route profile, the company determines the actual battery capacity requirement and uses only as much battery as necessary. After this initial concept phase, the modification can take place within a few weeks.

In the past fiscal year, e-troFit nominated Voltabox AG as the supplier of the battery unit for conversion kits for buses and trucks. At the same time, a team of Voltabox developers designed the battery system, which is precisely tailored to the needs of the conversion solution, in harmony with the drive components and vehicle control electronics.

The delivery of the first systems took place on schedule in the fourth quarter of 2019. Now that the framework contract has been concluded, the two companies have formally established a long-term cooperation for a continuous supply of lithium-ion battery systems.

Voltabox has 8 years of experience in battery development for the public transport market segment. Since 2013, the Group has equipped several hundred trolleybuses worldwide with lithium-ion battery systems. Voltabox can now tap into a promising new subsegment of this market through the e-troFit cooperation. 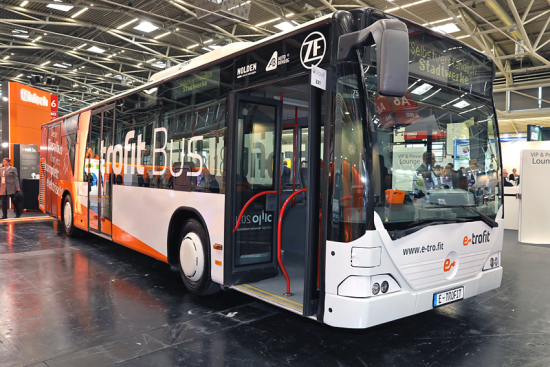 The retrofit solution is being expanded to other widely used bus and truck models as planned, and is also being rapidly marketed in markets beyond Germany.

Conversion Kit 1, to be distributed in the first step, contains a high-performance and modular Voltabox battery system consisting of modules with prismatic cells based on nickel manganese-cobalt (NMC) cell chemistry. Distances of up to 260 km can be achieved with one battery charge on this basis, and the system can be gradually scaled for longer ranges. The weight-optimized battery system as a whole is designed so that it can be mounted both at the rear of converted buses as well as on the roof structure.

The product is entering the market at a time when municipalities must act to reduce CO2 emissions in their city centers due to increasing regulatory requirements.

Compared to a new purchase, conversion is an extremely economical and sensible alternative based on lower acquisition costs and faster delivery times due to price benefits over time compared to a diesel bus. Instead of continuing to be driven elsewhere as used vehicles, buses originally equipped with conventional combustion engines are given a second life by e-troFit and will be environmentally friendly and locally emission-free in the future, which makes them future-proof for operators.

In addition to retrofitting, e-troFit also plans to address manufacturers in the future in order to equip new buses, trucks and other commercial and special vehicles.

e-troFit is a subsidiary of the technology company in-tech GmbH. At the end of 2018, the conversion solution was awarded the German Mobility Prize, which is presented by the “Germany – Land of Ideas” initiative and the German Federal Ministry of Transport and Digital Infrastructure.

They don't say how much it costs, but it might be worth it if you had a fleet of fairly new diesel buses with 10-20 years left in the bodies.
IMO, the main advantage would be in less NOX, diesel particulates etc, rather than CO2. Good for city use.

That is a good question @mahonj,
According to Urban Transport Magazine, "Retrofitting instead of new-built: conversion from diesel to electric buses"
Depending on the condition of the vehicle and the extent of the work, the conversion can cost between 300,000 and 350,000 Euro per bus. This is about half of the cost of new electric buses.
Ref:https://www.urban-transport-magazine.com/en/retrofitting-instead-of-new-built-conversion-from-diesel-to-electric-buses/

There is a used bus yard I have seen with hundreds of used ones,
some of them might be good enough to convert.