A team of researchers from Canada and the US has developed a system that quickly and efficiently converts carbon dioxide into simple chemicals via CO2 electrolysis. The researchers combined a copper electrocatalyst with an ionomer [polymers that conduct ions and water] assembly that intersperses sulfonate-lined paths for the H2O with fluorocarbon channels for the CO2.

The electrode architecture enables production of two-carbon products such as ethylene and ethanol at current densities just over an ampere per square centimeter. A paper on their work appears in Science. 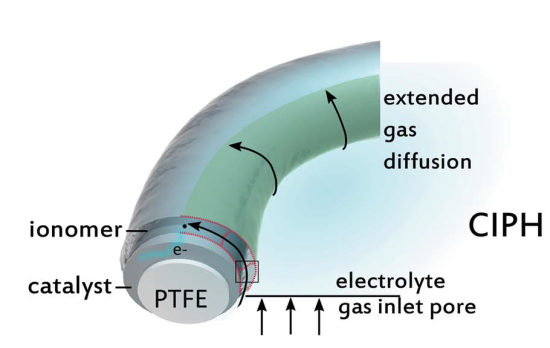 Electrolysis offers an attractive route to upgrade greenhouse gases such as carbon dioxide (CO2) to valuable fuels and feedstocks; however, productivity is often limited by gas diffusion through a liquid electrolyte to the surface of the catalyst. Here, we present a catalyst:ionomer bulk heterojunction (CIBH) architecture that decouples gas, ion, and electron transport.

The CIBH comprises a metal and a superfine ionomer layer with hydrophobic and hydrophilic functionalities that extend gas and ion transport from tens of nanometers to the micrometer scale. By applying this design strategy, we achieved CO2 electroreduction on copper in 7 M potassium hydroxide electrolyte (pH ≈ 15) with an ethylene partial current density of 1.3 amperes per square centimeter at 45% cathodic energy efficiency.

The key to the new device is a polymer coating that facilitates the transport of CO2 through the surface of the metal or electrode of the catalyst. Carbon dioxide, generally speaking, has difficulty penetrating aqueous solutions and reaching the entire surface of this material; so when the flow of electrons (electric current) is increased to carry out the reaction, there is not enough CO2 to be transformed.

The authors show that this limitation can be overcome.

We have discovered that a certain configuration of ionomers allows us to considerably increase the ease with which CO2 is distributed along the catalytic surface, thus allowing us to achieve higher productivity.

This ionomer coating contains hydrophobic (water-repellent) and hydrophilic (water-attracting) parts and is grouped together to form an ultra-thin layer of about 10 nanometres that helps to maintain the reaction where, from the CO2 gas and the hydrogen in the water (H+ protons), the hydrocarbon is built.

About two years ago, CO2 electrolysis systems were limited to electrical outputs or currents of tens of milliamps per square centimeter, meaning that only a few molecules of this gas can be transformed into something useful, but our discovery allows them to operate at currents a hundred times higher, more than one ampere per square centimeter. In this way, many more CO2 molecules can be transformed, reaching activities that were unthinkable a few years ago.

The researchers are now working on further increasing the efficiency of the system and its stability, which, although now at about tens of hours, is still far from the thousands of operating hours of the water electrolyzers.

This looks promising, though energy requirements are going to be extremely high.  It takes something in excess of 4 MWh to convert 1 ton of CO2 into hydrocarbons.  At 5¢/kWh, that's over $200 per ton CO2 (and much more per ton of product).

Unless energy is extremely cheap AND abundant, this is not a solution for bulk commodities.

valuable fuels...
Reuse to reduce, they can take CO2 and methane from digesters.

I would separate this into two parts: taking CO2 out of the air and making certain chemicals. The two do not have to be combined.
There is no need to combine the two.
And the easiest way to remove CO2 from the air is not to put it there in the first place.
So spend your money and effort on that.

Removing CO2 from air at 400 ppm may not be cost effective.
I agree, don't put it in the air, shut down old coal fired power plants.

There are a lot of things that do the hard work of taking CO2 out of the air FOR you.  It's much easier to upgrade that fixed carbon to what you want than to do the fixation yourself.

There is plenty of reasons to combine the two, such as the roughly 20% loss of energy in either

However, the first reaction increases the temperature of the products by more than 700 K, so there are opportunities for utilizing this waste heat for something useful, if proper technical and commercial integration can be achieved.

In Denmark we have a strong tradition for such 'sector coupling', which raises system efficiency greatly but other regions struggle to convince businesses to accept this hassle and commercial risk, mostly due to business culture and low cost of energy.

Low cost of energy enables a lot of great things, however usually at the expense of energy inefficient systems.