Norwegian wholesaler ASKO is deploying two battery electric Scania distribution trucks in its operations in Oslo, Norway. This pilot marks another milestone in the cooperation regarding electrified solutions for heavy transport between Scania and ASKO. Asko is also piloting the use of hydrogen fuel-cell trucks with Scania. (Earlier post.)

The two trucks that will go into ASKO’s operations have a battery capacity of 165 kWh, giving them a range of 120 km (75 miles), and are charged by 130 kW cable charging. 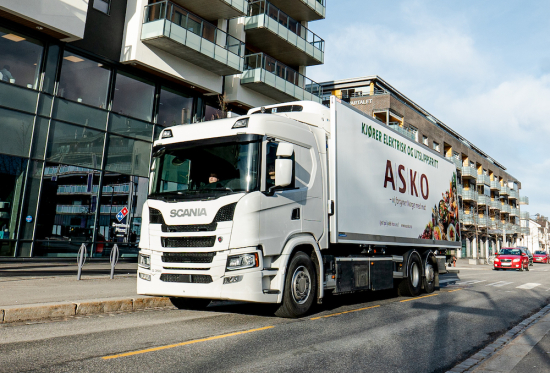 In the long run, electrification will be key to achieving a sustainable transport system for heavy vehicles as well. On the journey, it is as important as ever to work with customer-near development to understand the impact on the customers’ full operations, not only making sure that a technical solution works and the electricity that charges the batteries is sourced from renewable energy. That is why we are pleased with yet another important project together with ASKO.

—Karin Rådström, Head of Sales and Marketing at Scania

This project received financial backing from Enova, which is a state enterprise owned by the Ministry of Climate and Environment in Norway.

Scania’s work is based on a modular approach. In the battery electric trucks deployed in ASKO’s operations, the internal combustion engine in the powertrain is replaced by an electric machine, powered by rechargeable batteries.