Roskill: Niobium industry looking for a future beyond steel; Li-ion batteries a possibility

Niobium is a metal primarily used by the steel industry as a ferroalloy strengthening element. High Strength Low Alloy (HSLA) steel accounts for about 90% of niobium usage with an average content of about 0.03% Nb. Adding niobium reduces the amount and weight of steel required, an important feature for the automotive industry but also for infrastructure. Niobium consumption is driven by GDP but also by the regulatory environment as microalloying enhances construction safety.

Niobium consumption has increased at a 5.0% CAGR between 2010 and 2019, accelerating since 2016, according to Roskill Information Services. Consumption has benefited from the restructuring of the Chinese steel industry and from the new regulations prescribing stricter standards for construction.

Vanadium was seen as the main beneficiary of this ruling as steel mills’ prime choice for microalloying. However, the spike in vanadium prices (ferrovanadium prices increased by about 200% in 2018) caused Chinese mills to substitute niobium to vanadium and Chinese niobium imports increased 30% year-on-year both in 2018 and 2019. Whether steel mills will revert to vanadium now that prices of ferro-vanadium and ferro-niobium are close to parity is unsure as niobium price stability is perceived as a major marketing advantage, according to Roskill.

Another key characteristic of the niobium market is its highly concentrated supply. The three largest producers—Brazil’s CBMM, CMOC and Canada’s Magris —have a combined 97% market share. CBMM dominates the market with a 78% market share and is seen as the price-setter. CBMM’s market dominance will continue as the group will expand its production capacity by 50% in 2020 and is considering more capacity increases in coming years.

CBMM has been proactive at promoting the usage of niobium to the steel industry, implicitly at the expense of vanadium. However, the substitution factor has its limits, determined by technical factors (niobium has a lower solubility than vanadium). Moreover, Roskill forecasts that China’s steel production is close to its peak.

The niobium industry is aware of these issues and already looking for a future beyond steel, Roskill notes. Non-steel applications account only for a couple of percentage points in terms of consumption but electrical vehicles (EVs) batteries and nanocrystalline applications could grow at a double-digit rate in the next decade, depending on technological developments.

CBMM initiated and sponsored the Charles Hatchett Award in 1979; Hatchett discovered Niobium in 1801. The award recognizes outstanding work on the science and technology of niobium. The Award Seminars were added to the annual Award event in 2008.

The winner of the best paper in 2019 was an effort by researchers then at the University of Cambridge, Argonne National Laboratory and the Diamond Light Source, Harwell Science and Innovation Campus, on the use of niobium tungsten oxides for high-rate lithium-ion battery storage. The paper (Griffith et al.) was published in the journal Nature in 2018. 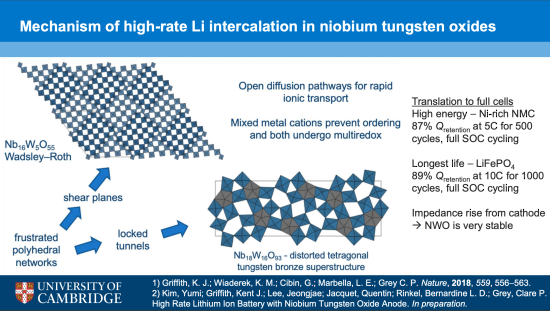 From the Hatchett Award Seminar presentation of the paper. Griffith et al.

As an alternative to nanoscaling, here we show that two complex niobium tungsten oxides—Nb16W5O55 and Nb18W16O93, which adopt crystallographic shear and bronze-like structures, respectively—can intercalate large quantities of lithium at high rates, even when the sizes of the niobium tungsten oxide particles are of the order of micrometers. Measurements of lithium-ion diffusion coefficients in both structures reveal room-temperature values that are several orders of magnitude higher than those in typical electrode materials such as Li4Ti5O12 and LiMn2O4.