Rio Tinto approved a $98-million investment in a new solar plant at the new Koodaideri mine in the Pilbara, Australia, as well as a lithium-ion battery energy storage system to help power its entire Pilbara power network.

The $2.6-billion Koodaideri mine was approved in November last year with construction commencing earlier this year. Production capacity will be 43 million tonnes annually with first production is expected to commence by the end of 2021. Koodaideri will deliver a new production hub for Rio Tinto’s world-class iron ore business in the Pilbara, incorporating a processing plant and infrastructure including a 166-kilometer rail line connecting the mine to the existing network.

Koodaideri will feature technology already in use across Rio Tinto, such as autonomous trucks, trains and drills, and implement systems connecting all components of the mining value chain for the first time. 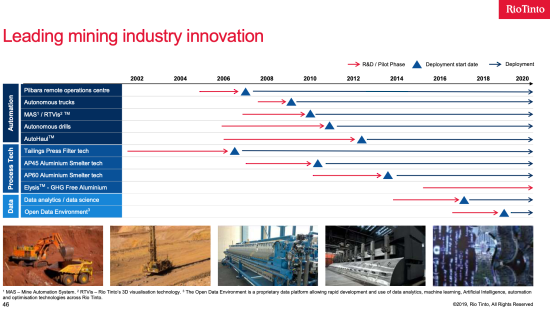 The plant, Rio Tinto’s first company-owned solar facility, will consist of an estimated 100,000 panels, covering an area of 105 hectares (0.41 square miles). Construction is expected to begin later this year, subject to government approvals, and is due to be completed in 2021.

Complementing it will be a new 12 MWh battery energy storage system in Tom Price that will provide spinning reserve generating capacity to support a stable and reliable network.

The solar plant and battery are estimated to lower annual carbon dioxide emissions by about 90,000 tonnes compared to conventional gas-powered generation.

Koodaideri, 100% owned by Rio Tinto, is located approximately 35 kilometers north-west of Rio Tinto’s Yandicoogina mine site, and about 110 kilometers from the town of Newman.

The operation has been designed to utilize an increased level of automation and digitization, helping to deliver a safer and more productive mine which is expected to be Rio Tinto’s lowest-cost contributor to its industry benchmark Pilbara Blend product.

Through the use of digital assets, advanced data analytics and automation, Rio Tinto expects to enhance the operation and maintenance of this new mine.

Koodaideri is a game-changer for Rio Tinto. It will be the most technologically advanced mine we have ever built and sets a new benchmark for the industry in terms of the adoption of automation and the use of data to enhance safety and productivity.

Funding for the solar plant and battery sits within Rio Tinto’s existing guidance for sustaining capital expenditure for its iron ore business.

Interesting: 34 Mw of Solar + 12 MwH of battery costing $98M.
So they will have about 20 minutes of storage, and will use this for load shaping as they bring up the gas generators, rather than powering through the night.
Demonstrates how difficult it will be to get to very high levels of renewables.
(Getting to 25-30 % of either solar or wind is easy enough.
Getting beyond 60% is hard (unless you have a lot of hydro to balance it).

mahonj, as far as I can see the $98 million is just for the solar array, with the batteries extra.

The only realistic way to get to much higher renewables would be to use hydrogen, with reversible electrolysis units both providing the hydrogen from surplus solar when available and load balancing or supplimenting it when not, as they could obviously provide power at night as well as during the day.

This could also be introduced on a modular basis together with expansion of the solar array to increase average renewables use.

The batteries would be redundant, as the fuel cells have sub second response times and are fine for frequency modulation as well as capable of powering the system fully if required and enough are installed, but presumably the batteries could be taken elsewhere.

@DM:
Or,
Add in more renewables somewhere else and net it out.
IMO, as long as you actually build the PV (and do not rely on "certs" from 3rd parties), you should be OK.
They should be able to get all their daytime electricity from PV in Australia (or so it seems from cloudy Ireland).
[ Night time power is another thing, probably use gas or coal or Hydro or wind. ]