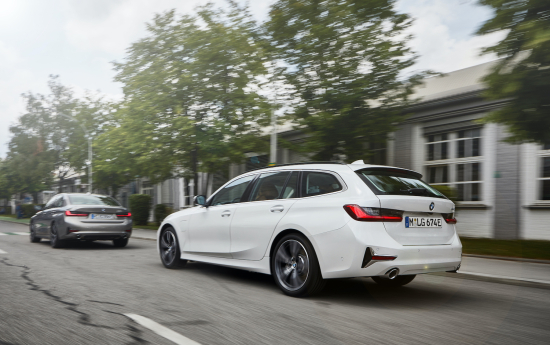 The electric range of the plug-in hybrid models in the BMW 3 Series reaches a maximum of between 55 and 68 kilometers.

Under especially high loads, this can be increased by an additional 30 kW/40 hp to up to 215 kW/292 hp for up to 10 seconds by means of the standard XtraBoost. The maximum system torque is 420 N·m.

The agility and sporty flair of the driving experience is highlighted by a specific drive sound tuning, a direct yet precise accelerator pedal curve and a specific shift program as part of the 8-speed Steptronic transmission that includes brake downshifts.

Intelligent all-wheel drive in the BMW 330e xDrive Sedan and BMW 330e xDrive Touring models distributes the power of both engine and electric motor between the front and rear wheels via an electronically controlled multi-disc clutch as required at all times.

In this way, BMW xDrive ensures maximum traction and driving stability in all road and weather conditions. In addition, the fully variable power distribution promotes agility in sporty driving. The combination of BMW eDrive and BMW xDrive is geared in particular to the requirements of driving on snow, in mountainous regions and off-road.

The newly developed diesel drive with BMW TwinPower Turbo Technology delivers a peak output of 250 kW/340 hp and a maximum torque of 700 N·m. Its pulling power is complemented with particularly spontaneous power delivery: this is taken care of by an electrical overboost that is generated by the 48-volt starter generator.

The resulting additional output of 8 kW/11 hp supports power delivery in dynamic driving situations. In addition, the starter generator also supports the combustion engine during continuous driving. This allows the diesel engine to run as much as possible in an efficiency-optimized load range so as to reduce consumption peaks.

The powerful drive of the new BMW M automobiles is combined with an 8-speed Steptronic Sport transmission, model-specific suspension technology and intelligent all-wheel drive. An M sports suspension including variable sports steering and an M sports brake system come as standard, as does the M sports differential.