The UK has awarded £7.5 million for the next phase of Gigastack, a new renewable hydrogen project, as part of the Department for Business, Energy and Industrial Strategy (BEIS) Hydrogen Supply Competition. (Earlier post.)

Producing hydrogen has traditionally been associated with high carbon emissions, but by using renewable electricity—e.g., from an offshore wind farm—the process of producing hydrogen from water (electrolysis) can be decarbonized.

As part of the initial feasibility phase of the Gigastack project, which finished in 2019, ITM Power developed designs for a low-cost modular 5 megawatt (MW) electrolyzer stack, collaborating with Ørsted to understand the potential synergies with offshore wind farms and with Element Energy to undertake a market analysis and explore business models for the first industrial-scale 100MW electrolyzers.

For the second phase of the project, which has now received funding from the department for BEIS, the consortium will conduct a Front-End Engineering Design (FEED) study on a 100MW electrolyzer system. The 100MW will be made up of 20MW electrolyzer module systems, including all aspects of dynamics and integration of renewable hydrogen supply based on power from offshore wind. 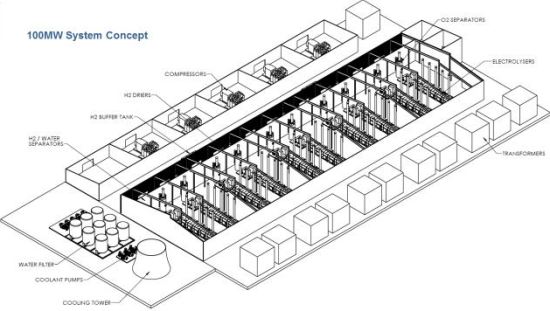 A key objective of the Gigastack project is to identify and to highlight regulatory, commercial and technical challenges for real applications of industrial-scale renewable hydrogen systems.

As part of the second phase, ITM Power will also install and trial both their next-generation electrolyzer stack and the semi-automated manufacturing machines required for large-scale and high-volume manufacture of these new large low-cost stacks. This will help validate a complete production system capable of delivering hundreds of megawatts of electrolyzers per year (initial target 300MW/year, ramping to 1GW/year).

Creating renewable hydrogen with offshore wind really has the potential to decarbonize industrial processes, and what is needed now is to scale up the electrolyzer technology and bring the cost down. We’ve seen this happen in offshore wind. With industry and government working together, there has been a rapid deployment and a huge cost reduction. This project aims to do the same with hydrogen. At the right cost, this technology has the potential to play a huge role in meeting the UK’s decarbonization targets. We’re excited to be part of this project in the Humber region where we are already very active, including constructing the biggest offshore wind farms in the world, Hornsea One and Two, and with them setting the global standard for deployment of offshore wind at scale.

@dave,
Batteries are OK for a few hours of electricity, but if you want to store really large amounts of energy, you need chemical or pumped hydro storage.
There is a lot more equipment needed up front to make H2, but once you have it, it is cheaper to add storage tanks, rather than double or triple the number of batteries.

This still has system efficiency and distribution problems. Wind power to grid and localized power to hydrogen seems better, but then scale affects efficiency.

I would guess that the most efficient clean (no CO2) way to generate hydrogen is to use high temperature electrolysis with nuclear power. Also, note that the hydrogen that they are proposing to generate is not destined to be used for fuel cells. It will be used in a refinery to make lighter fuel components from crude oil.

This is part of UK plans to decarbonise, which include injecting hydrogen into the NG grid initially at up to 20% ( trials underway now )

OK, but my comment on the most efficient way to make hydrogen still stands and the best way to decarbonise would be more nuclear power. Hopefully, the small modular reactors such as the Nuscale design will start to make a difference.

I have been an advocate of nuclear power for well over half a century, but they ain't building them in the West, at least not in quantity, so I look at what is happening.