An international collaboration led by Cranfield University will examine the potential for the low-carbon production of hydrogen from natural gas. The HyPER project (Bulk Hydrogen Production by Sorbent Enhanced Steam Reforming) will construct a 1.5 MWth pilot plant at Cranfield University to test the innovative hydrogen production technology that substantially reduces greenhouse gas emissions.

With £7.5 million funding from the Department for Business, Energy and Industrial Strategy’s (BEIS) Energy Innovation Program (earlier post), the project also involves US-based research and development organization GTI and Doosan Babcock, a specialist in delivery of low-carbon technologies. The project centers on a novel hydrogen production technology invented by GTI.

Following on from a successful first phase, the pilot plant will be constructed at Cranfield University in 2020 and become operational in 2021.

GTI’s innovative hydrogen production technology inherently captures CO2 during the hydrogen production process and shifts the chemical reactions to favor the production of more hydrogen. The outputs are high-purity streams of hydrogen and carbon dioxide which can be then stored, sold or transported to where it is needed.

The process for the direct production of hydrogen from natural gas that will be used in the project is compact yet scalable to very large plants. It has the potential to produce high-purity hydrogen at an up to 30% lower cost than conventional steam methane reforming methods that require CO2 capture as an additional expensive process step.

Conventional technology is also limited in the portion of CO2 emissions that can actually be avoided with reasonable economics. A key benefit of the new process is that it could be more economical and efficient than other technologies as the product streams are pressurized.

The CHG process utilizes calcium oxide (CaO) as a sorbent for the in-situ removal of by-product carbon dioxide, directly producing a 92+ vol% pure H2 product. This results in lower equipment costs, higher H2 yields and a concentrated CO2 product stream suitable for Carbon Capture and Sequestration (CCS) or other applications.

The proposed HyPER pilot plant is a 1.5 MWth pilot system of the CHG process, which includes both the reforming and sorbent regeneration systems. The proposed system enables detailed evaluation of the two key remaining risks of the system, which are elevated pressure sorbent enhanced reforming in a bubbling fluidized bed and reliable high-temperature solids handling. 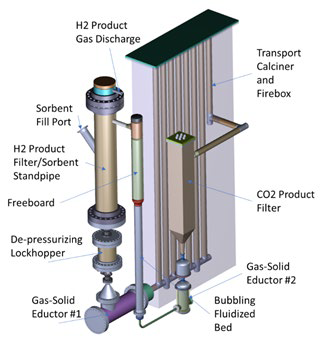 With the exception of process integration, the substitution of multi-cyclones for filters and simulation of the recycle stream, all of the main equipment expected of the full-scale plant is present on the pilot. 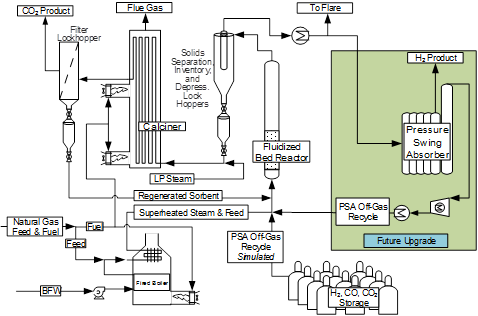 The PSA, H2 membrane separator and recycle gas compressors required for recycle at full scale represent commercially available equipment having minimal technical or cost risk and, on that basis, have not been considered for demonstration on the proposed pilot.

The proposed maximum output of 1.5 MWth represents an approximately 20x scale-up on the existing 71 kWth facility in the US, achieved through a combination of increased physical size and operating pressure.

The enormous advances in hydrogen and fuel cell technology will start to highlight who had rational grounds for opposition, and when the facts change change their opinion, and who are opposed on quasi-religious grounds, with effectively nothing which will change their mind and their objections rationalisations not answerable reasons.

In other news, it looks as though proper off grid independence through solar/batteries/hydrogen storage is now starting to hove into view.

Hydride storage would be preferable, but it is not a reasonable expectation that everything should be solved immediately.

Color me extremely skeptical.  The use of CaO as the sorbent means production of CaCO3, which IIUC requires temperatures over 1000°C to regenerate.  This is very costly in energy.

There was a post a while back about an electrically-driven high-temperature PEM cell which separated and compressed the hydrogen, which drove the SMR reaction toward pure CO2 (plus steam) on the feed side.  I will bet that that cell is far more efficient than this process.

The production of CO2 is not a positive result!

I had a look at the cycle, which is common one, and well understood:
https://britishlime.org/education/lime_cycle.php

I've dug out a technical paper on the HyPER process:
https://assets.publishing.service.gov.uk/government/uploads/system/uploads/attachment_data/file/866373/Phase_1_-_Cranfield_-_HyPER.pdf

If I am not misreading it, which is possible, it seems to indicate an overall efficiency including reprocessing of 73.1% in table 1, almost the same as the best alternatives but with the lower capital costs they claim elsewhere.

I'd be grateful if others could check this, to make sure I have not misread!

Well, the Lime Cycle page admits that temperatures over 1000 C are required to calcine CaCO3 back to CaO.  The CHG paper is so acronym-heavy I lost track of the flow because I had to keep flipping backwards to figure out what they were talking about.  And I'm up to page 8 and still not sure WTF they mean by "bara".

I feel like the latter paper is an effort to baffle with bullshit.

I steer clear of that level of analysis, as I don't have the training to make it straightforward.

Until proven otherwise, I assume good faith, so am pretty happy that it looks like I read their claimed efficiencies right.

As more info comes in, it may prove to be BS, as a lot of breakthroughs which don't pan out are, but until then I am keeping it in the 'possibles' file, although the point about the high energy for the reformation is entirely accurate and a big question mark.

It does not apply in this case, but I think that the use of renewables for process heat can often up the claimed efficiencies of the fossil fuel bit to higher levels, at least from the GHG POV

So solar thermal seems a candidate ( not for this ) to use instead of NG to assist the reformation of NG, where normally part of the NG is simply burnt to provide it.

Electrolysis using steam is also way more efficient, so perhaps solar thermal has a part to play there too.

This does not seem the way to go, they have to make the CAO from CAO3
to begin with which takes lots of energy, converting it back takes more.

It seems to me that their main interest is tied to energy consumption and employing the "triple B" principle to to disguise their inefficient process.