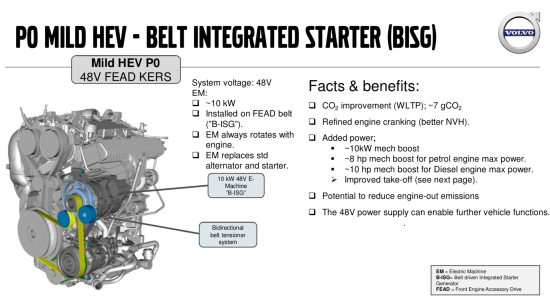 Introduced on the XC90 and XC60 SUVs last year, the mild hybrids are now also available on all other 90- and 60-series cars, as well as on the XC40. The mild-hybrid powertrain options on the V90 Cross Country represent the first electrified variants in the history of the Cross Country range.

Volvo Cars also introduced refreshed versions of the S90 and V90 estate, including a refined exterior design and a brand-new, state-of-the-art sound system by Bowers & Wilkins.

In terms of exterior design, Volvo designers have introduced a number of refinements on both the front and rear of the S90 and V90, including new foglights, a new spoiler design and a new lower front bumper.

On the V90, the most striking feature is a brand-new rear light design, including full LED-powered signature lighting and a sequential turn indicator.

Another new feature inside is an Advanced Air Cleaner with a PM2.5 particle sensor. First developed for the Chinese market and now rolled out globally, it allows drivers to monitor interior air quality via the centre screen. If desired, the Advanced Air Cleaner can clean the cabin air of almost all tiny particles within a few minutes.

Both the new Bowers & Wilkins audio system and the Advanced Air Cleaner technology are now available on all 90 and 60 series models based on the Scalable Product Architecture (SPA) platform.

Seems a lot of effort for 7%, on the other hand, 7% is 7%.
How much extra does it cost ?
I wonder will they be able to up it with larger batteries (or whatever) and get closer to the 30% you can get with a full hybrid.

Anyone buying such ICE Cars should know the residual value in a few years will be almost Nothing because supply/demand for used ICE cars Will be grossly out of balance. For BEV cars it will be the oppositie. This taken into account, why buy an expensive inferior car if you van buy a cheaper but superior alternative?

Look at the resale of LEAF then tell us how swell it is.

Volvo says 7 g/km in WLTP. This is far less than 7%. If baseline is 200 g/km (?), it would be only 3.5%. Then they also say: “…up to 15% fuel savings” but that is most likely under ideal conditions and it would be far lower under “normal” real-world driving conditions. Still, if the general powertrain development gives approximately 0,5% per year in improvement, it would still be a substantial gain.

@Alain
Car manufacturers will make a fortune on customers like you. Early adopters always pay a lot for their curiosity.