The methodology evaluated the global supply of and US demand for 52 mineral commodities for the years 2007 to 2016. Twenty-three mineral commodities—including some rare earth elements, cobalt, niobium and tungsten—pose the greatest supply risk for the US manufacturing sector. These commodities are vital for mobile devices, renewable energy, aerospace and defense applications, among others. 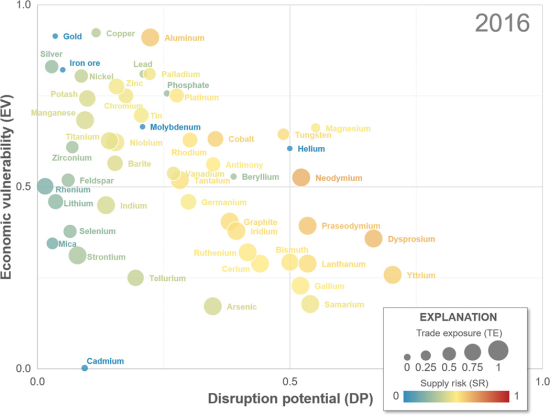 Manufacturers of new and emerging technologies depend on mineral commodities that are currently sourced largely from other countries. It’s important to understand which commodities pose the greatest risks for which industries within the manufacturing sector.

Supply chains can be interrupted for any number of reasons. International trade tensions and conflict are well-known reasons, but there are many other possibilities. Disease outbreaks, natural disasters, and even domestic civil strife can affect a country’s mineral industry and its ability to export mineral commodities to the US.

Risk is not set in stone; it changes based on global market conditions that are specific to each individual mineral commodity and to the industries that use them. However, the analysis indicates that risk typically does not change drastically over short periods, but instead remains relatively constant or changes steadily.

One thing that struck us as we were evaluating the results was how consistent the mineral commodities with the highest risk of supply disruption have been over the past decade. This is important for policymakers and industries whose plans extend beyond year-to-year changes.

For example, between 2007 and 2016, the risk for rare earth elements peaked in 2011 and 2012 when China halted exports during a dispute with Japan. However, the supply of rare earth elements consistently remained among the highest risk commodities throughout the entire study period. 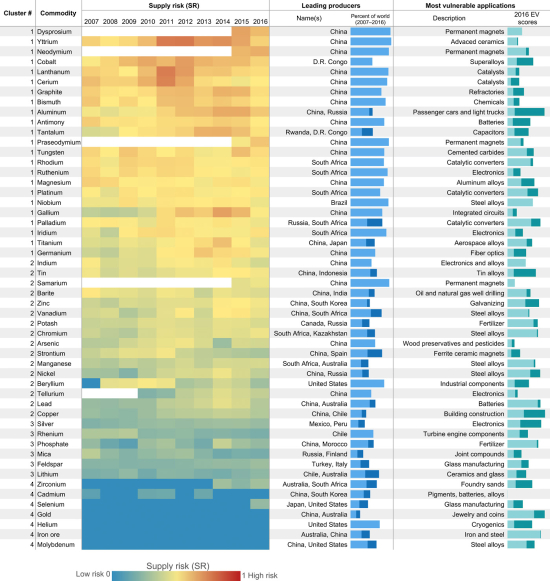 Heat map displaying the SR for all commodities examined for years 2007–2016. Warmer (i.e., orange to red) shades indicate a greater degree of SR. Commodities are listed in descending order of their 2007–2016 average SR and identified by cluster based on a hierarchical cluster analysis. Leading producing countries, based on primary production, are identified, and their share of world production from 2007 to 2016 is displayed in the stacked blue bars. The most vulnerable applications in 2016 are identified, and their contribution and the contribution of all other applications to a commodity’s overall EV are depicted in the stacked teal and dark teal bars, respectively. Nassar et al.

In 2019, the US Department of Commerce, in coordination with the Department of the Interior and other federal agencies, published the interagency report entitled “A Federal Strategy to Ensure a Reliable Supply of Critical Minerals,” in response to President Trump’s Executive Order 13817. Among other things, the strategy commits the US Department of the Interior to improve the geophysical, geologic, and topographic mapping of the US; make the resulting data and metadata electronically accessible; support private mineral exploration of critical minerals; make recommendations to streamline permitting and review processes enhancing access to critical mineral resources.

The USGS National Minerals Information Center is the source of supply and demand data for more than 90 minerals and mineral materials essential to the US economy and national security.

World trade can be beneficial or make your country dependent.