NTSB issues 9 safety recommendations after Tesla crash investigation; says no vehicle in US is self-driving

The National Transportation Safety Board held a public board meeting Tuesday during which it determined the probable cause for the fatal 23 March 2018, crash of a Tesla Model X in Mountain View, California. 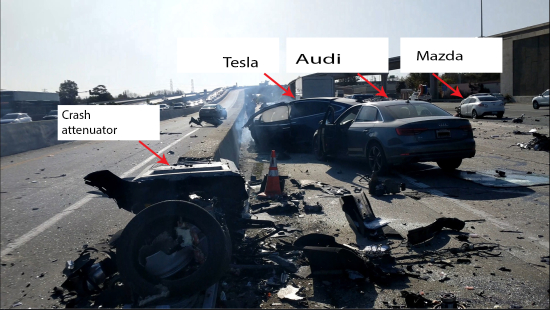 Based on the findings of its investigation, the NTSB issued a total of nine safety recommendations the recipients of which include the National Highway Traffic Safety Administration (NHTSA), the Occupational Safety and Health Administration (OSHA), SAE International, Apple Inc., and other manufacturers of portable electronic devices. The NTSB also reiterated seven previously issued safety recommendations.

The NTSB determined the Tesla “Autopilot” system’s limitations, the driver’s over-reliance on the “Autopilot” and the driver’s distraction—likely from a cell phone game application—caused the crash.

The Tesla vehicle’s ineffective monitoring of driver engagement was determined to have contributed to the crash.

Systemic problems with the California Department of Transportation’s repair of traffic safety hardware and the California Highway Patrol’s failure to report damage to a crash attenuator led to the Tesla striking a damaged and nonoperational crash attenuator, which the NTSB said contributed to the severity of the driver’s injuries.

In this crash we saw an over-reliance on technology, we saw distraction, we saw a lack of policy prohibiting cell phone use while driving, and we saw infrastructure failures that, when combined, led to this tragic loss. The lessons learned from this investigation are as much about people as they are about the limitations of emerging technologies. Crashes like this one, and thousands more that happen every year due to distraction, are why “Eliminate Distractions” remains on the NTSB’s Most Wanted List of Transportation Safety Improvements

The 38-year-old driver of the 2017 Tesla Model X P100D electric-powered sport utility vehicle died from multiple blunt-force injuries after his SUV entered the gore area of the US-101 and State Route 85 exit ramp and struck a damaged and nonoperational crash attenuator at a speed of 70.8 mph.

The Tesla was then struck by two other vehicles, resulting in the injury of one other person. The Tesla’s high-voltage battery was breached in the collision and a post-crash fire ensued. Witnesses removed the Tesla driver from the vehicle before it was engulfed in flames.

The NTSB learned from Tesla’s “Carlog” data (data stored on the non-volatile memory SD card in the media control unit) that during the last 10 seconds prior to impact the Tesla’s “Autopilot” system was activated with the traffic-aware cruise control set at 75 mph.

Between 6 and 10 seconds prior to impact, the SUV was traveling between 64 and 66 mph following another vehicle at a distance of about 83 feet. The Tesla’s lane-keeping assist system (“Autosteer”) initiated a left steering input toward the gore area while the SUV was about 5.9 seconds and about 560 feet from the crash attenuator.

No driver-applied steering wheel torque was detected by Autosteer at the time of the steering movement and this hands-off steering indication continued up to the point of impact. The Tesla’s cruise control no longer detected a lead vehicle ahead when the SUV was about 3.9 seconds and 375 feet from the attenuator, and the SUV began accelerating from 61.9 mph to the preset cruise speed of 75 mph.

The Tesla’s forward collision warning system did not provide an alert and automatic emergency braking did not activate. The SUV driver did not apply the brakes and did not initiate any steering movement to avoid the crash.

The driver was an avid gamer and game developer. A review of cell phone records and data retrieved from his Apple iPhone 8 Plus showed a game application was active and was the frontmost open application on his phone during his trip to work. The driver’s lack of evasive action combined with data indicating his hands were not detected on the steering wheel, is consistent with a person distracted by a portable electronic device.

To address these safety issues the NTSB made nine safety recommendations that seek:

The full final report is expected to publish online in the next few weeks. Lessons learned from the emergency response to the post-crash fire will be incorporated into a separate NTSB report on electric vehicle battery fires. That report is expected to be released in the third quarter of calendar year 2020.

Harsh comment, but the gamer was killed because he was not paying attention to the road and was using his phone when behind the wheel. And how many people in other vehicles have had accidents when driving and using their phones?

I don't see any harsh comment? The purpose of these investigations must be to find the causes so solutions can be found. All comments are welcomed without predjudice and as many different angles as can show light inform an improved outcome . In the rush to sell new product meet budget constraints or simply keep the roads open many business gloss over the risks and in this instance everyone concerned relied on common sense and good judgement from others.
That more people aren't killed on our roads defies the odds every day and certainly Tesla have benefitted from that. The important consideration is how to make consumers and technology users as risk free as possible and achieving that outcome must be everyones main priority. - Not finding blame.