Purdue University researchers have developed a turbomachine expander that offers an efficient and safe strategy for heating and cooling. The researchers developed their device to decrease energy consumption of the vapor-compression heat pump cycle (VCC), which is commonly used in homes, businesses and vehicles for cooling and heating. 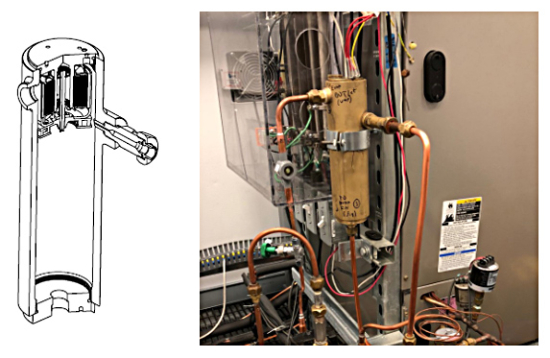 With increasing demand for high-efficiency vapor-compression cycles (VCCs), each aspect of the conventional four component VCC, i.e. a compressor, condenser, expansion valve, and evaporator, is being considered for potential performance improvements. As such, several solutions for harnessing the energy released from refrigerants during the throttling process of a conventional VCC have been investigated to increase the overall cycle efficiency. These devices are referred to as expansion work recovery devices.

Several strategies regarding modification of the expansion process are becoming increasingly common to help improve the efficiency of VCCs. … The expander investigated in this system operates using a turbine, and is thus technically a turbomachine expander. However, the device will be referred to as an expander herein for conciseness. This expander uses a nozzle to convert the potential energy of the high-pressure refrigerant into a high-velocity stream, which then impinges on the turbine that is directly connected by a shaft to a generator.

… The study presented here experimentally investigates two control mechanisms and the trade-off between performance and control of each when applied to an expander.

The novel turbomachine expander helps harvest previously wasted energy used in the process of moving the air from high to low pressure. The device can be used as a control agent within an existing heat pump. The team presented its work in the International Journal of Refrigeration.

Our solution packs a twofold punch in that it’s more efficient but still just as safe as conventional vapor-compression heat pump cycle operations. We created a device that’s the best of both worlds with a fixed nozzle and variable options for phase separation that allow a much broader range of applications than are possible with more conventional approaches.

Not only does our device help cut down wasted energy, which helps reduce electricity costs and improve efficiency, but it works across a range of ambient conditions. Our expander and control method ensure the safe operation of the heat pump system.

The other members of the Purdue team are Eckhard Groll, the Reilly Professor of Mechanical Engineering and director of the Office of Professional Practice, and David Ziviani, a research assistant professor of engineering.

The Purdue device can be used with any common heating and cooling systems found in homes, vehicles and industrial buildings.

The innovators are working with the Purdue Research Foundation Office of Technology Commercialization to patent the technology. The researchers are looking for partners to continue developing their technology.

An excellent university, I just really really want to enter it, I hope that everything works out. Estimates suffer a little, therefore I use the service https://paidpaper.net/review-99papers-com/navigate here on which I look at information about those sites that can help me. Here I just found a review of 99papers with which I just plan to collaborate.