Volkswagen will introduce the new Touareg R with a plug-in hybrid drive at the Geneva Motor Show (5 to 15 March 2020). The hybrid drive of the Touareg R essentially consists of a 2,995 cm3 V6 turbocharged gasoline engine (250 kW/340 PS), the electric drive motor (100kW/136 PS) and a lithium-ion battery (energy capacity of 14.1 kWh) built into the luggage compartment underbody. 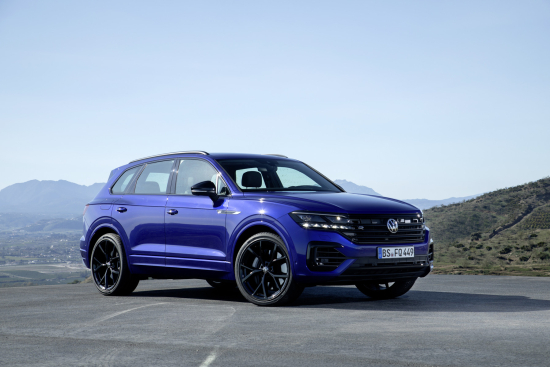 An 8-speed automatic gearbox (with Tiptronic) and a transfer box transmit the power to the standard 4MOTION all-wheel drive system.

When the battery is sufficiently charged, the new SUV starts in electric E-MODE for zero emissions. It can be driven at up to 140 km/h (87 mph) using electric power; above this speed, the turbocharged V6 gasoline engine (TSI) supplements the electric drive motor. The Touareg R will cover most commuter distances fully electrically.

With all-wheel drive and the powerful hybrid system (700 N·m torque), the Touareg R is designed for a superior maximum trailer weight of up to 3.5 tonnes.

This Volkswagen model is also the first plug-in hybrid SUV available with Trailer Assist—an assistance system for automated maneuvering with a trailer. This is also possible with purely electric power.

The latest Travel Assist version is also a new feature, enabling assisted driving up to speeds of 250 km/h (155 mph) for the first time.

The SUV was designed by the Volkswagen R performance brand, which traditionally develops the sportiest models in the Volkswagen range. The Touareg R represents a paradigm shift—it is the first Volkswagen R model to feature a plug-in hybrid drive. It is also the first time a hybrid model has been the most highly-powered Volkswagen.

The well-appointed Touareg R is set to enter the market in the second half of the year.

I wonder what MPG this thing will get in hybrid mode. It has mechanical AWD, standard TC 8-speed automatic. It seems the hybrid part is just a bolt on and without a plug this thing would be an absolute failure... It may be a failure even with a plug.

@GasperG This is a PERFORMANCE model, not an eco version. So "a complete failure" in what? With 250 kW ICE and 100 kW EV, a twin clutch 8 speed and AWD, it will be very fast. So a "complete winner"?

Well, the title of this site is Green Car Congress, so sorry about my obsession about MPG. OK, even if this is performance model, there is not much to like about the architecture of this drivetrain, it's mechanically complicated. They should invest more in the electric part and get rid of 8 speed transmission, give it more powerfull el. motors on each axle.... As I said this is just a bolt on electric drive on existing outdated drivetrain.

If this model works like the last Touareg Hybrid that came to US then the drive motor is sandwiched between the ICE and the transmission. That prior model had disconnect clutch so it could operate in Emode. The bigger draw back was the older chassis was not designed with a place for the battery which limited the hybrid function severely. I believe it was something like 30 mph and 5-10 mile range?

If you can take existing certified chassis and bolt on technology to improve emissions and reduce energy use then overall a win. Eventually the MEB cars (I.D.) will take over but this will bridge that gap while getting people used to the change.