A new report by the Union of Concerned Scientists (UCS) finds that the rising use of ride-hailing services is increasing carbon emissions, with ride-hailing trips producing nearly 70% greater emissions compared to the trips they are replacing.

This significant increase in emissions comes in part from “deadheading”—the miles a driver travels waiting for a ride request or picking up a passenger. In addition, ride-hailing trips frequently replace lower-carbon transportation methods—such as public transit, walking, or biking—that consumers might have used otherwise. 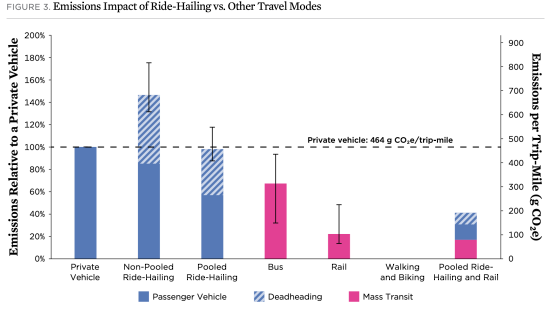 Car and ride-hailing emissions are per trip-mile, regardless of how many people are in the vehicle on the same trip, but emissions are adjusted for pooled trips. Bus and rail data are emissions per passenger based on average occupancy in seven metropolitan areas used in the study. The error bars for ride-hailing represent uncertainty in the percentage of deadheading miles. Error bars for bus and rail emissions represent variability among cities. Mass transit emissions do not indicate how emissions would change with increased ridership. Bus and rail operate on fixed schedules and are often less than fully utilized, so additional passengers do not always increase emissions. Source: UCS.

Despite these troubling findings about their climate impacts, ride-hailing services still have the potential to be part of a cleaner, low-carbon transportation future. Through electrification of vehicles and increased use of pooled rides, we can reduce the climate risks of ride-hailing services.

—Don Anair, deputy director of the UCS Clean Transportation Program and lead author of the report

UCS experts recommend that companies encourage the use of electric cars by offering attractive electric vehicle lease rates to drivers who lease vehicles for use on their platforms. They also suggest companies work with charging infrastructure providers to increase access to convenient charging for ride-hailing drivers. They can also encourage shared ridership by discounting pooled trips to make them more affordable.

The report suggests that while ride-hailing companies and policymakers bear the biggest responsibility in limiting ride-hailing’s negative impacts, individuals can help. Traveling by transit, walking, or biking when and where possible are the best choices for the climate. And when using ride-hailing, choosing a pooled or shared ride where available, or using ride-hailing to connect to mass transit, are good options. Selecting an electric ride is a good choice as well, though only in a few markets, including Seattle, do riders have this option.

It sounds obvious, but you need to see it calculated and written down to really believe it (and do something about it).