BAE Systems has been selected by Alexander Dennis Limited (ADL) and the Republic of Ireland’s National Transport Authority (NTA) to supply up to 600 electric power and propulsion systems for its new fleet of buses in Ireland. The selection includes an initial order for 100 systems. 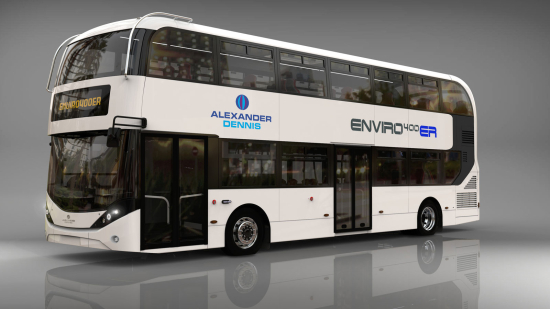 The Series-ER system (earlier post) uses the same components from BAE’s Series-E hybrid-electric system, and extends the electric travel time and distance without the worry of charging, without investing in non-standardized charging infrastructure, without taking power off the grid, and without decreasing the number of passengers on board when adding extra battery packs. Series-ER is essentially Series-E with a larger battery.

The Series-ER system extends the electric driving range and provides electric operating modes such as:

The technology is part of the company’s 20-plus years of experience developing and integrating electric propulsion systems and accessories for transit buses.

Series-ER builds on that foundation, maximizing the efficiency of the energy storage system. With increased battery capacity, the system provides zero emission travel without the need for the bus to stop and recharge. This also eliminates the need for cities to add costly charging infrastructure.

BAE Systems’ Series-ER technology is powering more than 200 buses across the globe, including major cities such as Brighton, Boston and San Francisco.