E-commerce sales in the United States in 2019 amounted to 11.0% of all retail sales— the highest percentage yet. In comparison, the corresponding percentage in 2000 was only 0.9%.

A common explanation of the rise in e-commerce is that it is a consequence of syphoning sales from traditional retail sales. Here I present the results of a new analysis showing that this explanation is not entirely correct. Instead, while e-commerce sales have recently continued to increase rapidly, traditional retail sales have stayed unchanged.

There are two important aspects of the method of my analysis. First, the analysis considered sales per capita (as opposed to total sales). Second, the changes in the sales amounts were adjusted for inflation.

The raw data for the calculations came from the U.S. Bureau of the Census (e-commerce and traditional retail sales), Proquest (population), and the Bureau of Labor Statistics (Consumer Price Index). The years examined were 2015 through 2019.

The table below shows the annual changes in both e-commerce and traditional retail sales per capita, with both adjusted for inflation. 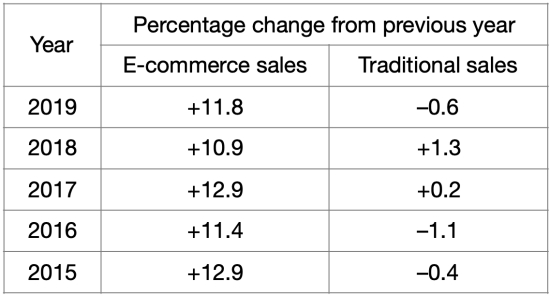 The results indicate that, between 2015 and 2019, e-commerce retail sales per capita increased every year, with the increases averaging about 12%, while the annual changes in traditional sales hovered near zero.

So, what do the results tell us? The most important finding is that, adjusted for inflation, traditional retail sales per capita have stayed unchanged for the past five years. That is consistent with a recent finding that, between 2007 and 2017, there was no significant reduction in the amount of travel in connection with purchasing goods and services.

The fact that traditional retail sales have not changed recently does not necessarily mean that the composition of the shopping basket has not changed. Indeed, it is quite likely that it has, because certain classes of goods and services are more amenable to e-commerce than others (e.g., books vs. gasoline).

Another important finding is that the annual percentage increases in e-commerce retail sales per capita have stayed approximately the same during the last five years. Compounding the five annual increases yields a total increase of 76% during this period.