Black carbon particles absorb heat in the atmosphere. For years, scientists have known that these particles are affecting Earth’s warming climate, but measuring their exact effect has proved elusive.

Researchers at Michigan Technological University and Brookhaven National Laboratory, along with partners at other universities, industry, and national labs, have now determined that while the shape of particles containing black carbon does have some effect on atmospheric warming, it’s important to account for the structural differences in soot particles, as well as how the particles interact with other organic and inorganic materials that coat black carbon as it travels through the atmosphere. 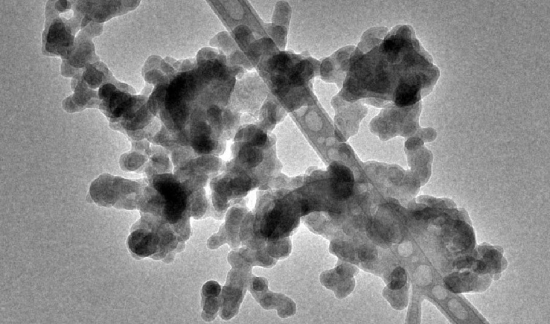 Atmospheric soot particles as seen under a transmission electron microscope are coated by organic and inorganic materials. Different particles collected from the atmosphere, even the same location and at the same time, can present very different amounts of coating from particle to particle. This heterogeneity has an effect on the ability of soot to absorb radiation. Source: MTU.

In an open-access paper published in the Proceedings of the National Academy of Sciences, the researchers provide a framework that reconciles model simulations with laboratory and empirical observations, and that can be used to improve estimates of black carbon’s impact on climate.

Through a combination of measurement and modeling, our analysis resolves the discrepancy by showing that particular laboratory designs or atmospheric conditions engender distinct compositional heterogeneity among particles containing black carbon. Lower-than-expected absorption results largely from increased heterogeneity, although slightly lowered absorption occurs even in a purely homogeneous system. This work provides a framework that explains globally disparate observations and that can be used to improve estimates of black carbon’s global impact.

Scientists for years have approximated black carbon particles as spherically shaped in models that frequently became coated by other organic materials. The thought was that as the soot particles travel through the atmosphere, the coating had a lensing effect; i.e., the coat focuses light down on the black carbon, causing increased radiation absorption. While soot particles are indeed coated in organic materials, that coating is not uniform from particle to particle.

When you take an image under the microscope, the particles never look perfectly like a sphere with the same coating. If you do a numerical calculation about perfect spheres coated by a shell, a model will show an enhanced absorption of the black carbon particles by a factor of up to three.

—Claudio Mazzoleni, professor of physics at Michigan Tech and co-author

Empirical studies of black carbon particles demonstrate that absorption is much less than models would suggest, calling into question the effectiveness of the model as well as our understanding of black carbon’s climate forcing effect.

Research suggests that the organic material coating is not fully spherical; depending on how the organic materials cling to a black carbon particle, the resulting shape can cause the particle to act very differently even if it has the same amount of material as another soot particle that is differently shaped. But even more important is that the amount of coating might change disparately from particle to particle. These two attributes both decrease the expected absorption enhancement.

Whereas most aerosol models simplify the representation of particle composition, the particle-resolved model tracks the composition of individual particles as they evolve in the atmosphere. This model is uniquely suited to evaluate error resulting from common approximations applied in global-scale aerosol models.

Essentially, the researchers have introduced into climate modeling the diversity of organic and inorganic coating on particles and the non-uniform nature of the particles themselves. By combining an empirical model with laboratory measurements, the model predicted a much lower enhancement increase in absorption by black carbon than previously thought. The updated modeling also brings the model’s output much closer to what was measured in the field.

This research provides a path forward for improving predictions of black carbon’s radiative effect on climate. Reducing black carbon emissions in the atmosphere can help reduce some of the effects of climate change. The results of this study suggest that a particle’s absorption per mass is lower than previously thought, but how much black carbon is forcing atmospheric warming also depends on emissions levels, interactions with clouds and the distance a particle travels.