The Governors Highway Safety Association’s (GHSA’s) report, “Pedestrian Traffic Fatalities by State: 2019 Preliminary Data,” projects that 6,590 pedestrians were killed on US roads in 2019. GHSA’s projection represents a 5% increase from 2018 in the number of pedestrian fatalities. This projection represents a continuation of an increasing trend in pedestrian deaths going back to 2009 and would be the largest annual number of pedestrian fatalities in the US since 1988. 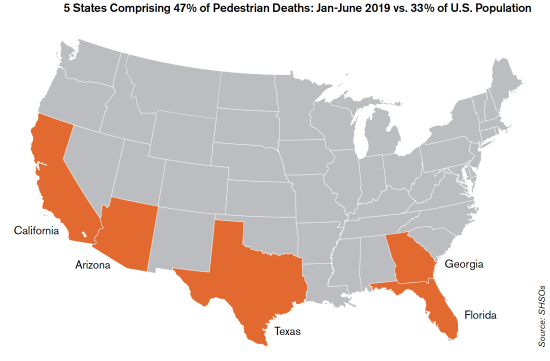 Five states (Arizona, California, Florida, Georgia and Texas) accounted for almost half (47%) of all pedestrian deaths during the first six months of 2019. By comparison, these five states represented approximately 33% of the US population, according to the 2019 US Census. Source: GHSA

Along with the increase in the number of pedestrian fatalities, pedestrian deaths as a percentage of total motor vehicle crash deaths increased from 12% in 2009 to 17% in 2018. The last time pedestrians accounted for 17% of total US traffic deaths was in 1982.

The current study is based on preliminary data from all 50 states and the District of Columbia (D.C.). Among the major findings:

The current report examines a number of factors that may be influencing the rise in pedestrian deaths, including the need for safer road crossings; unsafe driving behaviors; the increased presence of sport utility vehicles (SUVs); and the tremendous growth of smartphone use, which is a significant source of distracted driving.

The report was researched and authored by Richard Retting of Sam Schwartz Consulting.